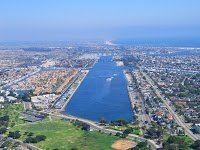 For athletes who will compete in the 2010 USA Swimming National Open Water Swimming 5K and 10K Championships in Marine Stadium in Long Beach, California in June, here are 10 tips:

1. Marine Stadium has a well-maintained infrastructure around it including parking lots, showers and a GPS-marked 1K course (buoy-to-buoy).

2. There are plenty of pools in the area and throughout Orange County within 30 minutes to train. This also includes Belmont Plaza which is a short 7-minute drive away.

3. Marine Stadium is a salt water venue as it is directly connected to the Pacific Ocean, but its salinity is low. The water almost tastes fresh, but it is not as clean as the Pacific Ocean because it doubles as a large boat marina.

5. Swimmers can practice at Marine Stadium, but morning training sessions are highly recommended. Marine Stadium is mostly empty throughout the year, especially in the early mornings. There may be an occasional rower, but rental kayaks are available nearby for coaches.

6. The 10K race at the 2010 Pan Pacific Swimming Championships and the 2010 USA Swimming National Open Water Swimming Select Camp will be held in the same venue.

The water is expected to be flat, bordering on glassy.

7. There are plenty of hotels of all price ranges available, especially in downtown Long Beach, but the race organizer will set up a host hotel for the event where all the pre-race technical meetings will be held as well as an open water swimming symposium and conference.

8. The race is sanctioned by USA Swimming and organized by Olympic champion Bob Seagren and his team at International City Racing.

9. The championships will double as the American qualifying race for the 2010 World Open Water Swimming Championships which should mean there will be great competition and exciting finishes.

The start and finish will be at a floating pontoon with standard electronic timing.