Trash Talking In The Tank

Photos courtesy of USA Today at the 2016 Rio Olympics and Associated Press at the 2008 Beijing Olympics.

Of all the Olympic sports, swimmers are generally considered among the most educated, genial and cordial of all athletes.

Swimmers, with few exceptions, are nearly always respectful of each other and controversial mano-a-mano statements delivered directly to each other or through the media are rare. 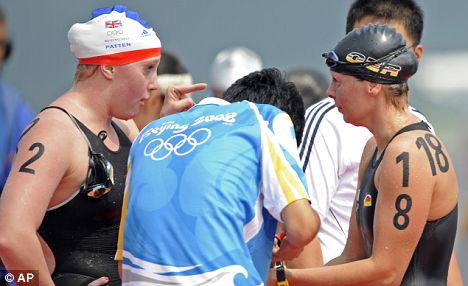 Angela Maurer of Germany and Cassandra Patten of Great Britain famously had very heated words for one another at the end of the 2008 Olympic 10K Marathon Swim in Beijing.

But at the 2016 Rio Olympic Games, the ambiance of the pool is punctuated with allegations and instances of doping by swimmers specifically those from Russia.

American swimmer Lilly King qualified first for the women’s 100m breaststroke to set up an interesting dual versus Russian Yulia Efimova who qualified second. Both women are mocking each other with finger waves and strong words, quite outside the assumed swimmer vis-à-vis swimmer geniality.

Efimova, who failed two separate drug tests, but was reinstated to the Olympics the day before her swim, posted a time of 1:05:72 in the first semifinal. From the pool, she appeared to mock her American rival King by waggling her index finger. It was in response to King’s similar finger-waggling done earlier in the day.

Then King, watching on a TV monitor in the stadium, was shown shaking her finger back at Efimova before swimming the fastest semifinal time of 1:05:70. With the two rivals swimming next to one another in the Olympic final, it will certainly be interesting to not only see them swim head-to-head, but also their reactions after the race is over.

“That’s just my personality. I’m not this sweet little girl, that’s not who I am,” explained King. “If I do need to stir it up to put a little fire under my butt or anybody else then that’s what I’m going to do.”

With the IOC’s decision to accept athletes proven to take drugs for purposes of gaining competitive advantages, today’s race featuring King and Efimova will certainly stir things up in the pool.