Traveling Around The World Towards The Bell Buoy 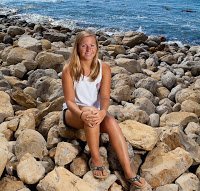 Three elite amateur marathon swimmers from America traveled around the world to participate in the Bell Buoy Challenge Swim this week. Jason Malick from Delaware, Denise Everitt of New York and Jen Schumacker of Los Angeles (shown on left) will compete against their South African counterparts on Hobie Beach.

Jason has done a handful of marathons in addition to some certified ice swims and will be attempting the Farallon Islands swim later this year. Denise will also compete in the upcoming South African Ironman and has swum 45 km around Grand Island above Niagara Falls.

Jen comes with a resume filled with endurance successes from two crossing of the Catalina Channel twice, channel crossings in Hawaii, the Manhattan Island Marathon Swim, a Lake Tahoe crossing and the scaling of Mount Whitney, the highest peak in the continental United States. After her swims in South Africa, Jen will be on here way to swim the Strait of Gibraltar, the English Channel, and the Molokai Channel. “I am so excited about the trio of open water challenges at this year’s Splash Festival. Last year, I had the privilege of competing in the Cadiz Freedom Swim, which was my first time visiting South Africa. I was struck by the country’s natural beauty and welcoming people, and could not wait to return. When the opportunity arose to compete in the Splash Festival events, I knew I had to be there. The enthusiasm for open water swimming in South Africa is unmatched and so inspirational to be a part of. I’m looking forward to a great weekend of racing.”

Michael Zoetmulder hosts the race that is part of the Splash Festival on Hobie Beach where yachts from the Algoa Bay Yacht Club will line the 4 km route out to the Bell Buoy from sunrise.