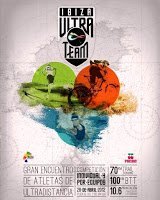 The Ibiza Ultra Team is a multi-discipline individual and team competition in Spain on April 28th. Soloists and team members can choose among doing 107K of mountain biking in Ibiza, Spain in a magnificent mountainous route, 70K of trail running crossing the island’s mountains and coves or 10.6K Traversía de la Posidonia – Formentera.

The Traversía de la Posidonia – Formentera has two swims: the longer 10.6K Vuelta A S’Espalmador and the shorter 5.3K Vuelta A Es Pas. Both the 5.3K and 10.6K swims depart and arrive from Formentera’s Playa de Ses Illetes beach while swimming over Posidonia Oceanica, a World Heritage site.

They will either swim around the island of S’Espalmador in the 10.6K Vuelta A S’Espalmador (the “ULTRA” course) or swim around Es Pas in the 5.3K Vuelta A Es Pas (the “MEDIO” course). If adverse weather, blooms of jellyfish, dangerous conditions occur on race day, the Ibiza Ultra Team has prepared three alternative courses in protected areas of Formentera.

Participants will compete individually in their discipline and in turn can form a team with two athletes from the event’s other two disciplines to be able to also compete in the team category. In the team competition, teams consist of athletes competing over the ULTRA courses. The overall score for each team is based on the sum of the points obtained by each team member. The formula used is T1 / T2 x C where T1 is the time of first place winner of each discipline, T2 is the time of team member and C is a fixed value for all participants. This formula weighs the disciplines that are completed in less time as much as the time of team members participating in longer disciplines.

The Ibiza Ultra Team 2012 will take place in Formentera in the Balearic Islands. S’Espalmador is a small, uninhabited island slightly north of Formentera, separated by a shallow sandbar. During low tide it is possible for one to wade between the two islands. The area includes pristine white beaches where nude sunbathing is allowed (on most beaches).