Traversing Across America Via Rivers And Roads 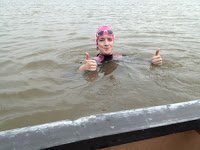 Kate Greene, winner of the Adventure Swim Contest sponsored by Jamie Patrick, is on her way on her open water swimming adventure across America.

Greene’s plan is flexible, but you already has two swims off her list.

She swam in Percy Priest Lake to Bear Island in Tennessee on swim #1 and crossed the Mississippi River on swim #2. She is currently on her way across America where she will swim in Lake Pontchartrain in Louisiana, Clinton Lake in Kansas, the Great Salt Lake in Utah, the Salton Sea in the southern California desert with a grand finale in Aquatic Park in San Francisco Bay on June 29th.

In the Great Salt Lake, Greene will swim with Gordon Gridley and Josh Green. But for the rest of her swims, she’s “pretty much expecting to swim solo on most of the other swims, but would be happy to have others join me.”

The month-long series of swims for a writer who learned how to swim via YouTube videos is “a pretty great adventure. I’ve never done a trip like this in terms of length, planning effort, and physical exertion. I’m also excited to meet people who swim and play in and around these waters. I feel like meeting new people in different places is always an adventure.”

For most of the trip, the energetic science and technology journalist will be joined with Jill Schepmann who came up with the concept of a road trip as a cross-country swim. Now that the adventure is underway, she – like many other swimmers and endurance athletes – can be obsessive. “When I first started to swim and really started to feel like I could understand it, I thought about swimming constantly. And since I’ve been training and planning this trip, I’ve been thinking about it quite a lot too…about 22 hours a day…” she commented with a wink.

And, like many things in the open water world now, technology has been a vital part of kick-starting her adventure. From knowing the Adventure Swim Contest even existed to connecting via Facebook and getting around via GPS. “I’m not even sure I have the basic skills to do this trip without the all these technologies (the Internet, a laptop and mobile phone). I first heard of Jamie’s contest through Twitter, so there’s that. From that point on, so much of the preparation has been done on an Internet-connected laptop and with phone calls. I get to collect my thoughts on swimming on my blog and then share it with people through Facebook and Twitter. It’s all connected.”

Her swims and observations are here.