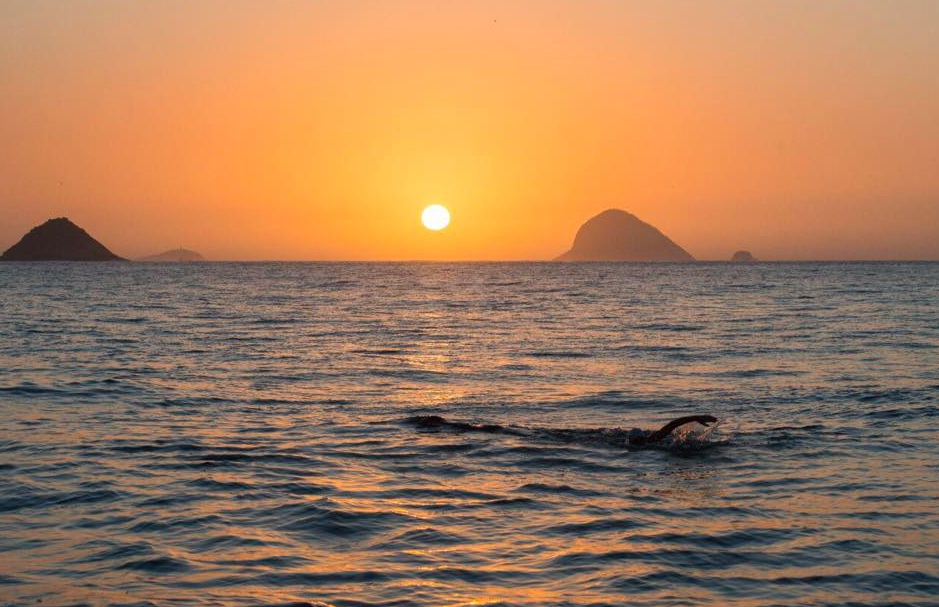 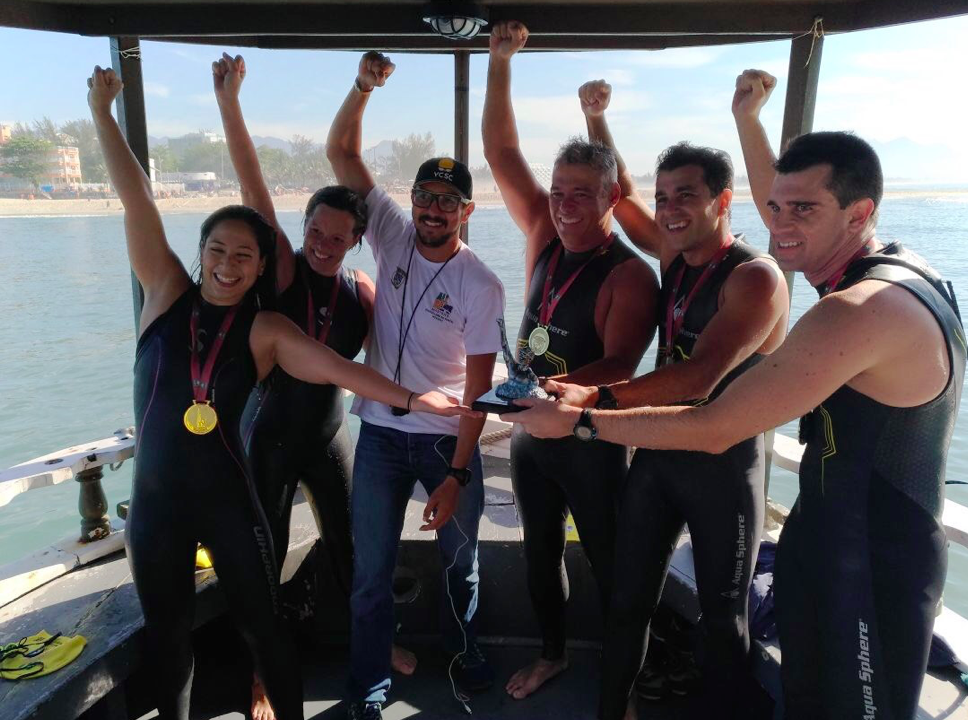 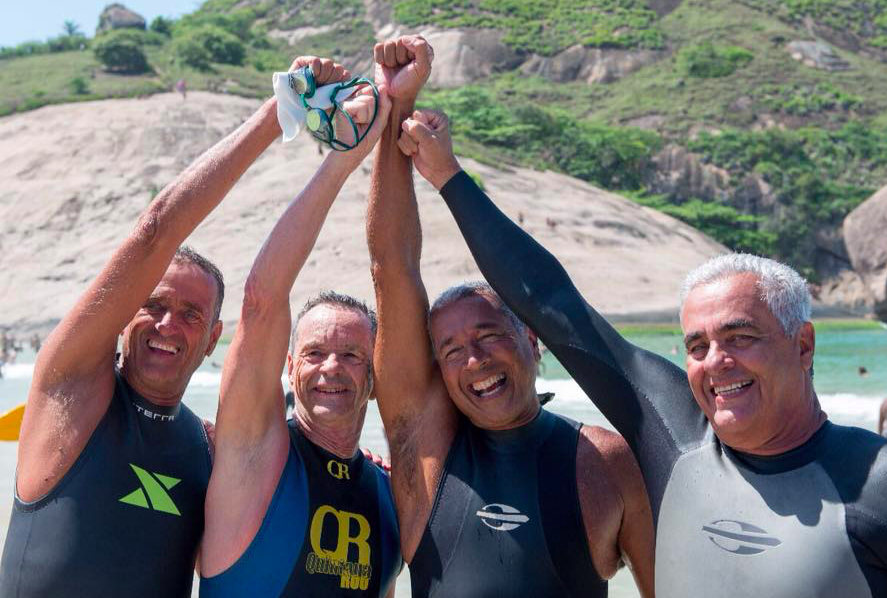 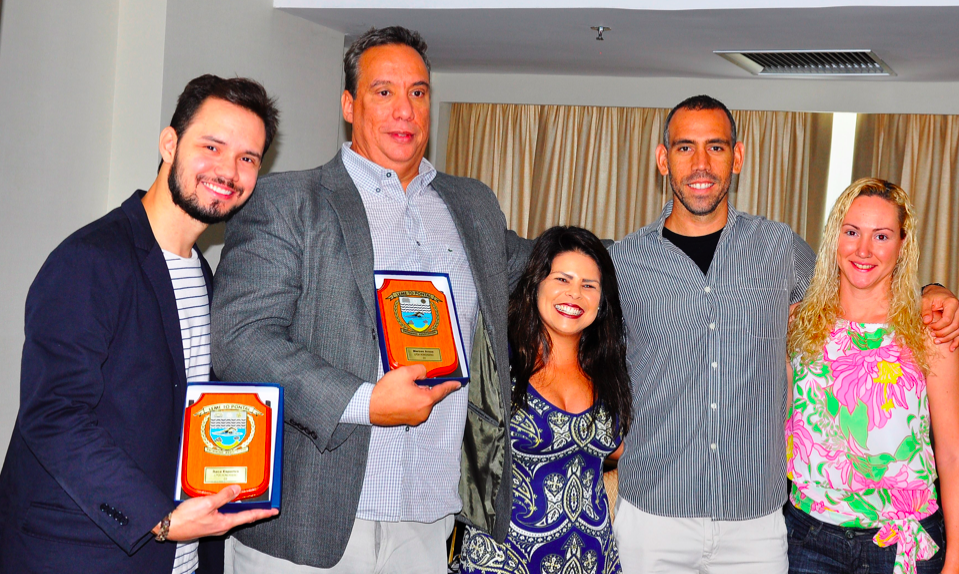 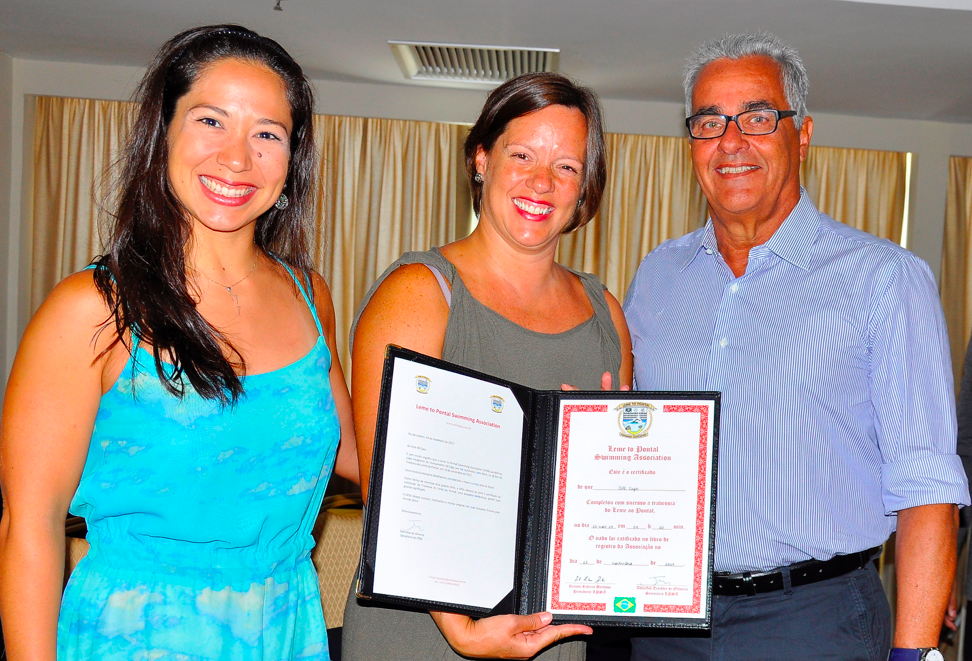 Adherbal de Oliveira reported from Rio de Janeiro, Brazil, “The week of November 10th to 17th was very special for the Leme to Pontal Swimming Association (LPSA). During this week, we had two relays successfully complete the Travessia do Leme ao Pontal and we held our annual Event to honor successful swimmers.”

Soares said, “I cannot stop thinking about what we did. What madness…in the best sense. What we did today united us today. And you’re going to call us forever. For the rest of our lives.”

The Naultilus 60 Mais was a team of sexagenarian including Brazilians Humberto Cesar Sampaio (age 66), Paulo Cesar Pereira (65), and Paulo Riepe (61) who were joined by American Bill Grant (68). Captain Humberto explained, “When we were thinking about the first crossing with athletes exclusively over 60 years old, we decided to call athletes who are rivals in open water races in Rio de Janeiro.

Have you ever thought of swimming 35 kilometers? Now imagine the mission for four men over 60 years old. This is the challenge of the Nautilus 60 Mais relay, which began at 1:30 am on November 15th swimming from Leme to Pontal, passing through various tourist attractions in the city of Rio de Janeiro including the beaches of Copacabana and Ipanema, Christ The Redeemer, and Cagarras Archipelago.

The captain continued, “I did a relay last year. I had the idea to making the first crossing with more experienced people. I joined these four friends, who are my opponents in various events. We had a good, strong group.”

When he proposed his idea, no one hesitated. “After a certain age, everyone has become a child. Everybody has met, no one has complained, and we are training together to have a good time in this relay.”

Grant has visited Rio de Janeiro three times a year since 2012 and participated in various open water swims and this challenge. Born in New London, Connecticut, the American businessman is retired and had been in Rio for a month in order to train for the relay.

“I swim three, four days a week in the week at sea and twice in the pool. I’m very excited. They told us that we will have a good temperature and a calm sea, so this is very good.”

Grant also gives the recipe for sports: it is never too late. “Do it today, start it. It will make you younger right away. It’s like regaining the years.”

The crossing of the Naultilus 60 Mais team began at 1:40 am on November 15th and finished 8 hours 49 minutes later. “We demonstrated that with determination and training, regardless of age and obstacles to be overcome, want is power.”

Adherbal de Oliveira held the LPSA 2017 event to celebrate and honor those who participated in the crossing. “It was held at a hotel facing the beach of Leme, near the starting point of the Travessia do Leme ao Pontal on November 16th. In addition to the LPSA swimmers, several representatives participated in the event aquatic marathon teams and championship leaders.

LPSA, in addition to giving certificates to the All Caps and Nautilus 60 Mais relays for successfully completing the Travessia do Leme ao Pontal, the Association also honored Marcos Arzua (Honorary LPSA #01), Samir Barel (Honorary LPSA #2), Ítaca Esportes Company (Honorary LPSA #3) and Swim Channel Company (LPSA Honorary #4) for the outstanding services they provided to their local society and to the sport of open water swimming.”

LPSA was nominated for the 2017 World Open Water Swimming Offering of the Year among a variety of unique products, services, events and organizations:

The nomination for the Travessia do Leme ao Pontal was The Travessia do Leme ao Pontal is a scenic 35 km coastal swim in Brazil that ends in Pontal and was inspired by a famous song in Brazil called Do Leme ao Pontal. The ocean challenge offers great natural beauty where the swimmer can admire from a privileged perspective the wonders of Rio de Janeiro including Sugar Loaf, Copacabana Beach, Christ the Redeemer, Cagarras Archipelago, Ipanema Beach, São Conrado Beach, Barra da Tijuca Beach and the Pontal Stone. Adherbal de Oliveira and Renato Ribeiro Barbosa created a governing body (Leme to Pontal Swimming Association) that enables solo and relay attempts for neoprene and bioprene swimmers along the gorgeous course. For creating a professional infrastructure complete with escort pilots, crew, guidance and record-keeping to support marathon swims and relays, for encouraging marathon swimming among people who are inspired to repeat the lyrics of a popular song, for offering opportunities throughout the year in temperatures that can range from 15°C to 26°C, the Travessia do Leme ao Pontal is a worthy nominee for the 2017 World Open Water Swimming Offering of the Year. 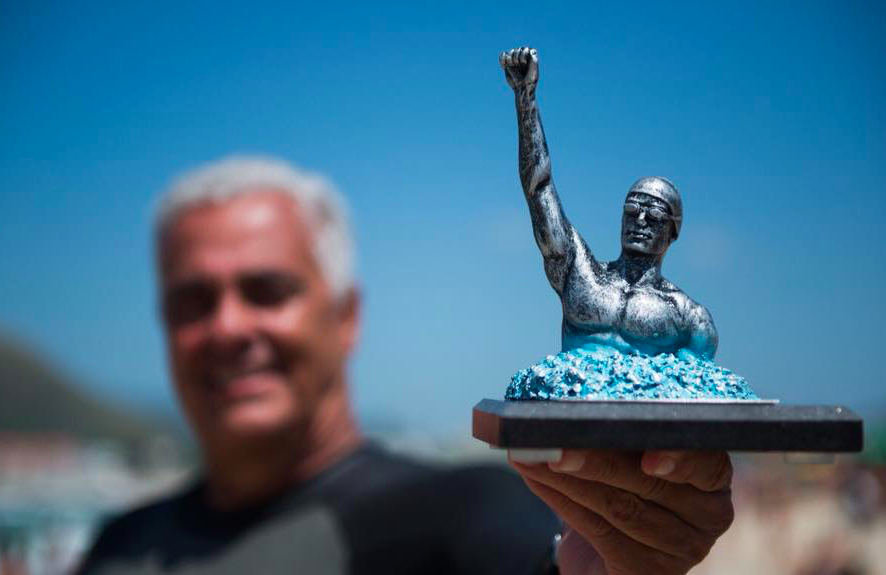 For more information on Travessia do Leme ao Pontal, visit here or here.