Trent Grimsey Retains His King Of The Sea Title 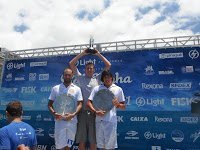 The men knew it was going to be a dog fight, they just didn’t expect the waves to be so rough and the conditions to be so challenging. But the men from Italy, Australia, South Africa, Brazil and Argentina were up to the task.

An 800m swim followed by a 200m beach run, five times, was the goal for the made-for-TV event on Copacabana Beach. Although Olympian Valerio Cleri just edged Chad Ho, Allan do Carmo and Trent Grimsey in the sprint race at the 2011 King and Queen of the Sea extravaganza in Copacabana Beach in Brazil, it was anyone’s race to win. The men would take it out and try to get in the best position coming into the surf zone.

The last lap was an all-out sprint. With the ocean swells continuing and the sun beating down on their laps, the men put on quite a show for the national TV audience. Around the last turn buoy with 100 meters to go, Valerio finally caught up with Trent. “I knew they might catch me, so I conserved a bit of energy for the finish.” And the finish was dramatic as Valerio stood up first for the final 50-meter charge up the beach. It looked like the Italian might take it, but Trent’s long legs and momentum after an initial stumble were too much. “I didn’t know I could do it, but it felt great,” said Trent who now appears back in form after a long illness took him down for the 2010 season.