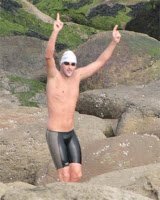 Kevin Murphy and Des Renford had a renowned 3-swim battle years ago in Australia, across the English Channel and in Loch Ness.

Renford won the first round in Sydney, Murphy had the upper hand in the English Channel, and both men were defeated (and hospitalized) over the sub-10°C water in the Scotish loch go the better of both of the International Marathon Swimming Hall of Fame inductees.

The hard-fought battle ended in a gentleman’s tie.

Dial forward to 2012 and there is another 3-bout battle between the heavyweights of the marathon swimming world.

They first face each other in the 30km professional Lake Ohrid Marathon in Macedonia this weekend on the last leg of the FINA Open Water Swimming Grand Prix circuit.

Then the duo head to Poland to participate in the new BCT Gdynia Marathon where the men will race for US$10,000 together with 3 other men and 10 women.

With US$10,000 up for grabs for first place, some of the best open water swimmers in the world are taking part in the inaugural race. Accomplished swimmers like Pilar Geijo, Argentina’s World Open Water Swimming’s Woman of the Year, and Poland’s Natalie Charlos who placed 15th at the Olympic 10K Marathon Swimmer headline the 18km competition in the Bay of Puck sometime between August 24-26 depending on the weather conditions.

“I expect that the race will be very grueling and difficult,” said Mallory Mead among the most celebrated American masters swimmers and Megan Melgaard, an open water swimming sprinter stepping it up in a longer distance pro swim.

Stoychev, arguably the greatest marathon swimmer of all time with 11 consecutive professional marathon swimming titles to his name as well as the only person to swum the English Channel under 7 hours, is the favorite in both events. But the 23-year-old Grimsey is hungry to take the mantle from his 35-year-old rival.

The first two head-to-head battles in Macedonia and Poland will be followed by a virtual battle in the English Channel where Grimsey is intent to beat Stoychev’s world record of 6 hours 57 minutes.

While Grimsey will have Stoychev clearly in his sights in Macedonia and Poland, he will also face Mother Nature in the English Channel while chasing Stoychev’s record. But if there is any contemporary professional marathon swimmer ready to rip off a fast English Channel crossing, it is Grimsey.