Tri Going From Goggle Malfunction To A Great Experience 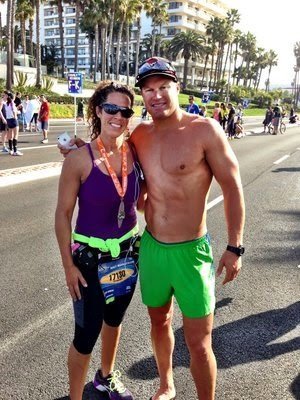 The 2014 IRONMAN World Championship presented by GoPro was this weekend with the eyes of the world’s triathlon and endurance communities focused on the stamina, strength and speed of the world’s top 2,187 multi-sport athletes in Kona, Hawaii.

The world’s media in the form of television and social media heavily covered the event, reporting on the fastest and those with fascinating human interest stories.

But even the omnipresent airways and ubiquitous Internet could not cover every triathlete in depth all the time. The lifestyles, training regimen and race strategies of the triathlon stars are reported. The hard-luck comeback stories and motivational recovery-from-tragedies of the slower athletes are also broadcast and shared among millions of fans and viewers.

Matt Paz of Long Beach, California may be one of many of those guys.

The former baseball player turned triathlete admitted he made a rookie mistake early on Ironman day. “I lost my swim goggles and used a brand new pair,” he explained. “The new goggles felt great, but after 10 minutes, I realized they were way too tight and felt like my head was gonna explode. I tried to tough it out, but it was making me sick so I stopped and took them off to relieve the pressure. But I ended up doing that 4 times [during the swim].”

Not only did Paz have to battle a headache and a goggle malfunction, but also over 2,000 triathletes stirring up turbulence in the out-and-back swim leg. “There were [lots of] good swimmers in this race. Usually I can get away a little bit, but with [so many] elite athletes out in the water, it was a battle during the entire swim. My swim time wasn’t [my] best. Then on the bike during the first 15 minutes I got put in the penalty box for 4 minutes for blocking or something: me and 10 other guys. That was a first.”

But Paz took his less-than-stellar start and transformed it into a positive experience. “After that, I decided to put my race on cruise control and enjoy the moment and the event. I am glad I did. It was an amazing experience.”

After the race, Paz was positively reflective. “I am a little sore, but not as much as usual. After the swim and the beginning of the bike leg, I decided to take it easy and just really enjoy it and soak it all up. Normal fatigue and a little dehydrated as I did exercise for 11 hours 5 minutes straight in the heat and humidity.

It was not even close to the time I was trained for, but I got the best experience possible
.”