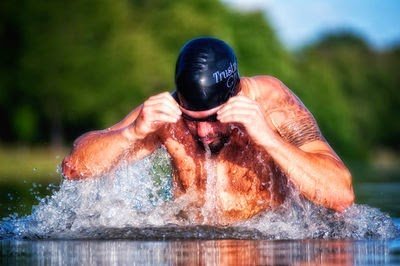 The Sub-32 Marathon Club (also Sub-3 Squared Club) is a select group of endurance athletes who have swum a full 10 km marathon swim without a wetsuit, fins or paddles under 3 hours and who have also run a full 42 km marathon run under 3 hours.

Fran Crippen has done it. Chris Palrey has also done it over the course of his career.

After posting this challenge in the triathlon community, many endurance athletes claimed that many triathletes can do both sub-3 running and swimming marathons over the course of their career and most professional triathletes can do so back-to-back.

While that Sub-3² dual feat may be the case, it has yet to be documented in a competitive setting.

Miller explains his challenge here. “I issue this challenge to the professional triathlon community because a charity race between two endurance athletes, mono-a-mono, would be an amazing way to not only push ourselves to the breaking point, but most importantly, create a media buzz by doing it in the name of charity! I picked the triathlon community out of respect, as I have seen first-hand the grueling training involved in preparation for an Ironman race. Personally, I want to see what some of their finest can bring to the table.”

“The difficulty of the Sub-3² Challenge is vastly under appreciated by top endurance athletes. Swimmers can easily do a sub-3 swim marathon. Good runners can easily do a sub-3 marathon run. But a back-to-back run-swim at a sub-3 marathon pace is more difficult than meets the eye,” explains Steven Munatones who came up with the concept. “Therefore, I sincerely hope that top triathletes will be willing to race against Darren to prove that the Sub-3² Challenge is a doable achievement. The race will be something that I greatly look forward to watching.”

Miller outlines the invitation, “I am flexible with an early/mid-summer date off the coast of southern California. At this point, I am pushing for Memorial Day weekend [around May 25th]. A 26.2-mile marathon running course will be GPS mapped by veteran marathon and ultra-marathon runners, beginning in the Oceanside/Carlsbad region, and running south toward La Jolla Cove. The 6.2-mile swim course will be a last minute decision, as I have local marathon swimmers keeping an eye on the tides. It could be a direct shot down the coast, or follow and ‘out-and-back’ pattern from the starting location. My challenger will be provided with everything they need, but is more than welcome to bring their own support vehicles and crew; both on land and water.”

Perhaps wearing Nike gear, they will Just Do It.