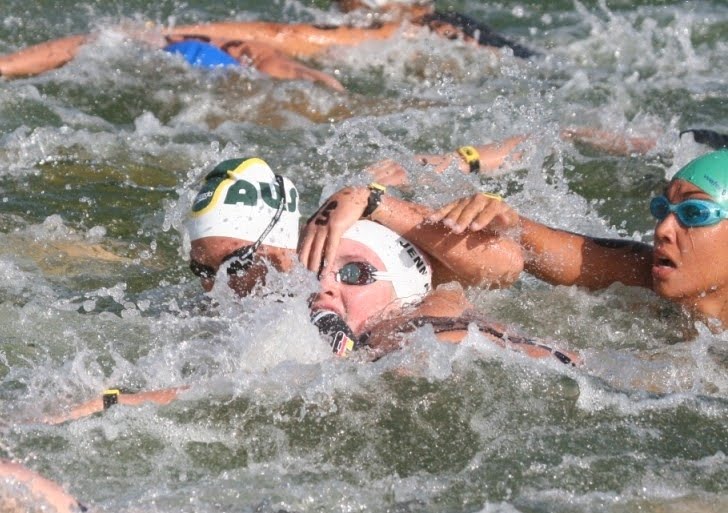 Among the fastest open water swimmers in the world, especially among the female gender, there is plenty of physical contact in the 5K and 10K races around the turn buoys or by the feeding stations – and many place in between.

Granted most of the physical contact is incidental and unintentional. The conflict is simply caused by too many athletes swimming too fast and too aggressively in a small area. But there are many, many incidents of actions, plainly unfair and intentional, that are not seen by officials.

Elite open water swimmers have come out of 5K and 10K races with black eyes, large lacerations, chipped teeth, broken ribs, scratched corneas, painful bruises and other injuries as a result of unintentional and intentional actions at different points along the course.

Athletes swim in extremely close proximity to one another and they are hit with their elbows, knees, feet, hands and arms. Yes, it is part of the game. Yes, race officials police the action by giving yellow cards (warnings) and red cards (disqualifications).

But athletes still get hurt. The victims of these actions never get a chance to re-do the swim and perhaps have another chance at better positioning. And, perhaps even more importantly, the athletes who do cause the black eyes, broken ribs, chipped teeth and lacerations are never punished long-term in the sport.

At the elite domestic and international competitive levels, there are trained officials who monitor the competition. But what about at the local, mass participation levels? At a large majority of races covered by The Daily News of Open Water Swimming, most races have no trained officials on the course and most infractions go not only unpunished, but also unseen and unreported.

In an interesting contrast, the triathlon world views physical contact MUCH differently than the sport of open water swimming.

Here is one example. View this video before reading the aftermath below.

According to SlowTwitch, after investigating the incident for a month, the International Triathlon Union (ITU) punished the triathlete in question with a 6-month suspension for unsafe and unsportsmanlike conduct.

ITU voted to impose a 6-month suspension against the triathlete based on the evidence from the race and testimonies from the on-course technical officials. The athlete was already disqualified by the Chief Swim Official. The ITU rules state that such a disqualification “is a penalty appropriate for severe rule violations, or dangerous or unsportsmanlike conduct.”

While physical contact will always be a part of open water swimming, especially as the stakes get higher and higher, but there is wisdom in suspending athletes who hurt others in races, especially when it results in injuries that directly impact the placing of the victim.