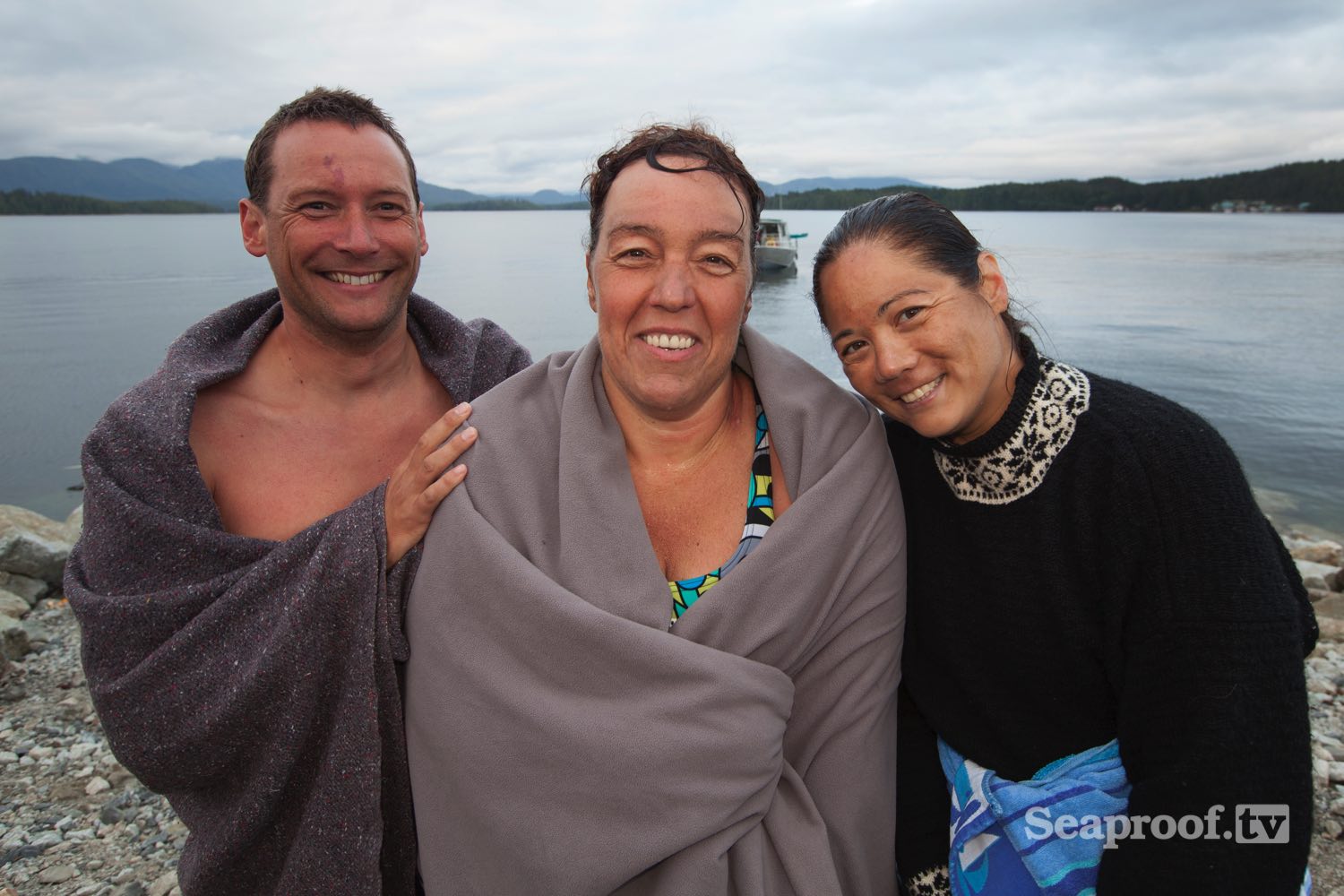 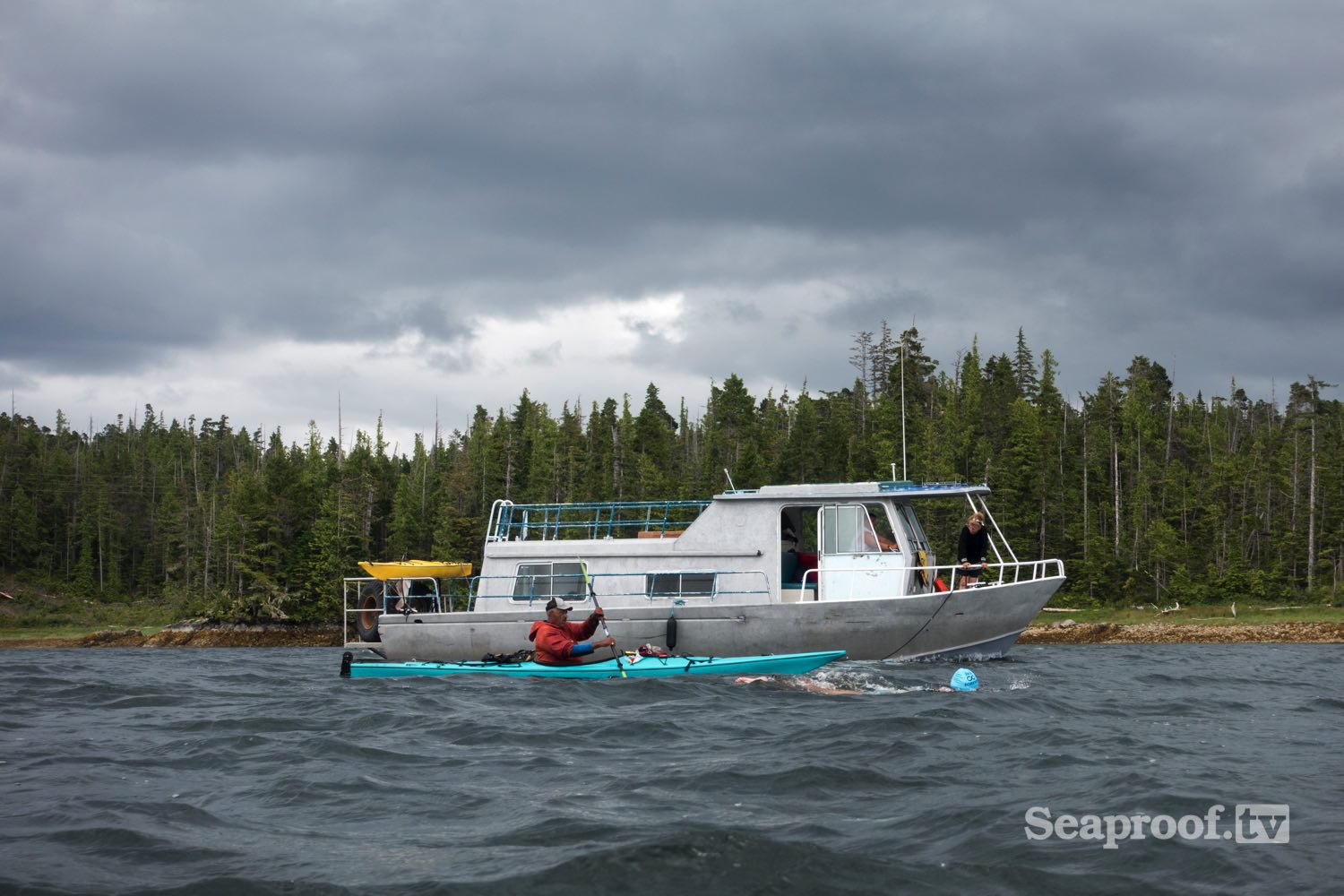 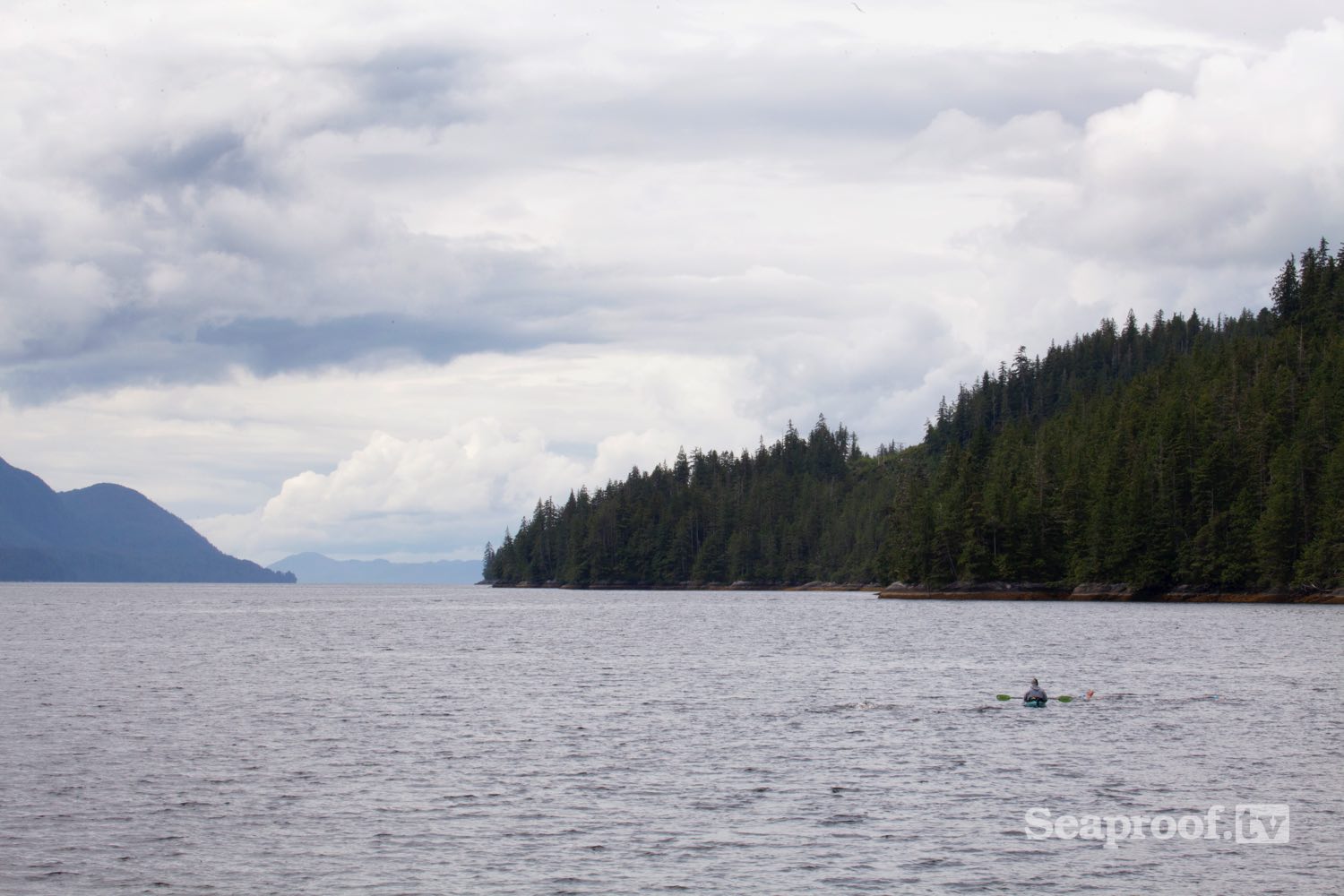 On July 12, 2016 three Victoria Masters swimmers – including Jill Yoneda, Susan Simmons and Dale Robinson – and a support crew of six departed from Drifter’s Cove on Denny Island and headed up Fisher Channel and Cousins Inlet to Ocean Falls.

Dubbed the Great Bear Swim, the plan was simple; swim from the historic site of the Ocean Falls Aquatic Club to Bella Bella, Campbell Island – a 50 km voyage in the traditional territory of the Heiltsuk First Nation.

The team arrived at the Government Dock in Ocean Falls mid-afternoon and spent the next several hours exploring the historic ghost town which was once the home to over 3,000 residents. As they disembarked their boat, they were greeted by Larry, one of the town’s current 100 residents and the caretaker of the Ocean Falls Museum. News of the swim had reached the town through social media prior to expedition team’s arrival.

In town overnight, the team explored what was once a thriving community that produced an incredible team of high-performance swimmers between 1948 and 1970. Olympic, Pan American and Commonwealth Games medalists include Ralph Hutton, Sandy Gilchrist, Jack Kelso, Dick Pound, Ian Mackenzie, Allen Gilchrist, Lenora Fisher and Jim Portelance. Collectively they won 59 medals during that period; just over 50% of the total medal winnings for Canada during their era.

By 9 pm the expedition team had settled in at the Ocean Falls Fishing Resort as final preparations for an 8 am departure were made.

On July 13th at 8:53 am Robinson, Simmons (who has multiple sclerosis) and Yoneda were perched on rocks at the edge of Cousin’s Inlet about 30 meters from the waterfall and at the site of the old Ocean Falls swimming pool. Simmons singled to their crew and within seconds the 3 plunged into the 14°C (57°F) water making their way down the inlet. Yoneda wore a sleeveless wetsuit while Robinson and Simmons went bioprene.

By noon, the trio arrived at Fisher Channel and were well on their way to Stoney Island, the stop point for the day. A few hours later Robinson, who had set a goal of 10 km per day, exited the water at the 15 km mark. Simmons and Yoneda, who was beginning to feel the effects of the extreme cold, continued to make their way down the channel.

By 5 pm, the two women had reached the tip of Stoney Island. The island’s rocky face left the two with little room to exit the water onto land. Crew member Tom Gilmore paddled ahead and found a small crop of rocks where they two could exit. By 5:40 pm that day the pair had swum 25 km. Yoneda was shuttled to the team’s safety boat where she was treated for stage 2 hypothermia. Her body temperature had dropped below 35°C and she was shivering violently. Simmons, who has been swimming in cold water for several years, was unaffected by the cool temperature.

Within 12 hours, and after a good night’s sleep, the team was headed back at Stoney Island for a second 25 km swim. Simmons and Yoneda would once again find themselves on the same crop of rocks where they had landed on the night before. Soon, they were back in the water. The air temperature was a few degrees cooler that morning, leaving the two women chilled before they entered the water.

Thirty minutes into the swim, the two became separated. Simmons swam around the back side of a small crop of rocks to avoid a herd of seals. Unknown to her, there was a group of humpbacks playing in the waters ahead. Her team had her swim on into the safety of Gunboat Passage where she met up with Yoneda – and Robinson who jumped into the water to join his teammates.

Yoneda swam a total of 7.5 km choosing to exit the water before the cold set in as it did the day prior. Robinson, who had exceeded his goal by 5 km the previous day swam 11 km of the passage, 1 km more than he had anticipated. Simmons continued on heading toward Shearwater and Bella Bella.

At the end of Gunboat Passage, opposite Yates Island, Simmons was hit by 15 knot winds causing her to be side swiped by 2 to 3 foot chop. She had to move fast to make her way across the fast moving water which kept pushing her toward the shore. After 2 hours of battling the active waterway, she managed to reach calmer waters and was well on her way to Shearwater.

By 6:30 pm Simmons was at the entrance to the marina in Shearwater. A large group had gathered on the dock to cheer her on on she swam. Yoneda had re-joined her in the water. The two stopped to thank the community members for their support, in particular Shearwater’s Fishermans’ Bar & Grill that had been actively fundraising for the swim throughout the day.

With just under 5 km remaining in this first swim in the region, Simmons made her way toward Bella Bella. One kilometer from shore, Robinson joined in for the final approach and by 8:30 pm, the 3 swimmers were greeted by several First Nations community members who had been waiting on shore.

The 50 km Great Bear Swim is the first known open water swim in the region with water temperatures comparable to those of the English Channel.