Trio From Hinsdale Central Make It On Land And Water 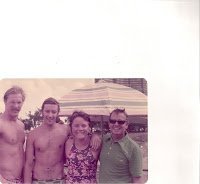 Professionally, the trio of teammates from Hinsdale Central High School performed well in the open water…and continued their careers on land.

Kinsella went on to Harvard Business School and has enjoyed a successful business career. Stanford graduate Bucha embarked on a rewarding career as an attorney while Dodson is an accountant for non-profit groups and small businesses.

Dodson is also a five-times prostate cancer survivor who has been a top fund-raiser for Swim Across America in Chicago. The Chicago Open Water Swim is held on August 4th in Lake Michigan where all proceeds benefit the Rush University Medical Center.