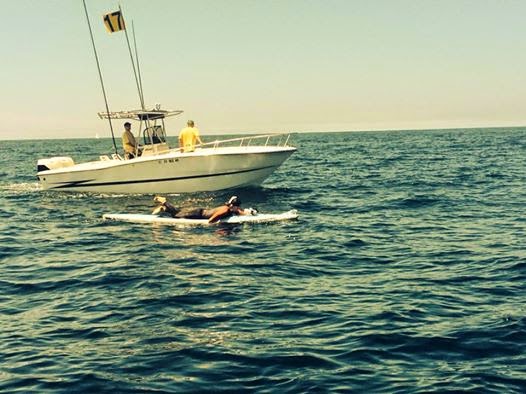 The first person to complete this double crossing was the renowned Cindy Cleveland. One of the legendary water women of the 20th century, Cleveland completed three Catalina Classic paddle board crossings in 1985, 1986 and 1987 placing in the top three in the stock division in addition to doing solo one-way and two-way swim crossings of the Catalina Channel and the first 50-mile circumnavigation swim around the island off the California coast.

In 1999, Cleveland, a 10-year Los Angeles County lifeguard veteran, was the first woman to receive the Tom Blake Award presented by the Hennessey Paddleboard Cup Committee to individuals who have made ‘extraordinary contributions to the sport and lifestyle of surfing.’

The second person to complete the double crossing was International Marathon Swimming Hall of Fame Honour Swimmer Carol Sing who swam 20.2 miles across the Catalina Channel at the age of 55 and paddled across at the age of 63.

Cleveland, Sing and van der Byl…quite a trio of women who know few boundaries in the Pacific Ocean.