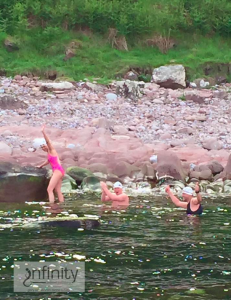 Courtesy of Pádraig Mallon between Mull of Kintyre and Ballycastle, Northern Ireland. The Dál Riata Channel Swim, previously known as the Mull of Kintyre Swim, is a 17 km swim between Mull of Kintyre in Scotland to Ballycastle in Northern Ireland. The 10.5-mile channel crossing was first attempted by Mercedes Gleitze in 1928 and was finally completed by Wayne Soutter from Mull of Kintyre in Scotland to Ballycastle in Northern Ireland in 2012 and later crossed by 210° Southwest, a 4-person relay team in 7 hours 33 minutes. teamRIPTIDE – with Michelle Brooker, Jack Boyle and Noel Grimes – became the first three-person team to make this crossing in June 2016. They started at the Mull Of Kintyre in Scotland and made landfall south of Cushendun in Northern Ireland in 7 hours 44 minutes. “Their crew included Milo McCourt and Afreen Ahmed with co-navigator Charles Stewart. At one point, their maximum swim speed was clocked at 9.9 km per hour,” reported co-navigator Pádraig Mallon. “This brings the total to three successful crossings of the Dál Riata Channel with many more aspirants with swim slots for the coming season with Infinity Channel Swimming.” Photo shows teamRIPTIDE making landfall with Michelle Brooker finishing 44 minutes into her swim leg while Boyle and Grimes joined her on the final swim to shore. Copyright © 2008 – 2019 by World Open Water Swimming Association