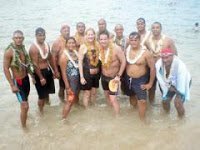 Inspired by Bruckner Chase, a crew of local swimmers made history over the weekend when they completed a 9-mile relay swim from Aunu’u to Utulei in Amerika Samoa.

The ambassadors of the Toa o le Tai youth ocean heroes program joined Chase and Michelle Evans-Chase in an unprecedented kick-off of Ocean Week. Over the course of this past year, the team started ocean swimming and conquered a channel that they had never before dreamed swimmable.

The members of the Toa o le Tai Ocean Heroes Program including Charles Miller, Christina Pulu, Alesana Alesana and Daniel Saifolo, along with members of the Department of Public Safety Marine Patrol Unit, were photographed by Jeff Hayner.

Still with their goggles on their heads, the team was rightly proud of the achievement of the Toa o le Tai (“Hero of the Sea“) program.