Troy Prinsloo Is A Strong Contender At The Olympic Marathon 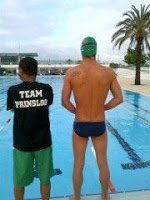 Hercules Troyden Prinsloo from Durban, South Africa qualified for the Olympic Marathon Swimming 10km in London and is considered one of the darkhorses for a podium finish on August 10th in the Serpentine.

A 2008 Olympian in the 1500m freestyle and 2011 graduate of the University of Georgia in the United States, Prinsloo shifted over to the open water in 2011 with great success. “I do the majority of my training in Durban now with my coach Nick Gray and in Cape Town with Cedric Finch who I started working with at the beginning of this year.”

And like many who have reached his level, the time commitment and personal sacrifice is significant…but worth the pain of admission.

“I usually swim about 18 km a day and between 90-100 km a week. I swam pool my whole life, but since 2011 I have completed changed my focus to open water swimming.”

While over 30,000 people and a global television audience are expected to watch Prinsloo race six loops at the Olympic 10K, his training is far removed from the public eye. “I train on my own and there have been numerous occasions where I am the only one in the pool training with the coach on the side.” But he mixes things up as he experiments in his new discipline. “I usually kick 1 km per session and pull half the session, so about 4 km of pulling each set. Since I am very new to open water swimming, I am not too sure on how to taper for it properly. For [the Olympic Marathon Qualification race in] Portugal, I had a 2-week taper where I dropped the mileage and intensity quite a bit.”

His workouts – for those not called Hercules – can be intimidating. “The toughest workout I did was when I was training for the mile was in college with my coach Harvey Humphries. He made us go a 500 on 5:50 long course meters. Then, we went 5 x 100 on 1:05. We did that 6 times without a break. It was extremely difficult because we had to try hold [our] mile pace for the 100s. Holding 60s isn’t easy on 1:05.

His memorable first name is a family name. “Hercules is my father’s first name too. But I go by my second name Troy because I’ve been called that since I was a kid…and it’s kinda embarrassing to be called Hercules.” Strong as he is physically, his previous experience at the 2008 Beijing Olympics will undoubtedly help me in London. “I know how tough the level of competition is. I know what to expect in London and will be able to handle the pressure a lot better.”

The Games will certainly be a pressure boiler, but Prinsloo has the pedigree to stamp his name in the annals of Olympic marathon swimming history.