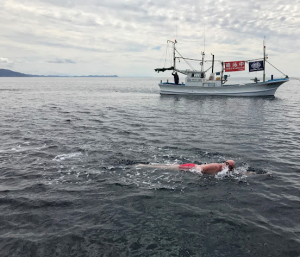 Location The Tsugaru Channel or Tsugaru Strait (津軽海峡 in Japanese) is a channel between the Honshu, the main island of Japan, and Hokkaido in northern Japan connecting the Sea of Japan with the Pacific Ocean. Oceans Seven A crossing of the Tsugaru Channel is one of the swims in the Oceans Seven. Most swimmers attempt to swim the 19.5 km body of water between Kodomori Cape or Tappi Misaki on the Tsugaru Peninsula in Aomori, Honshū and Shirakami Misaki on the Matsumae Peninsula in Hokkaidō. The Tsugaru Current passes from the Sea of Japan to the Pacific Ocean, and winds, turbulence and waves can be very high in this area along with marine life including a variety of sharks including Great White Sharks. Japan’s territorial waters extend to three nautical miles (5.6 km) into the channel instead of the usual twelve, reportedly to allow nuclear-armed United States Navy warships and submarines to transit the strait without violating Japan’s prohibition against nuclear weapons in its territory. 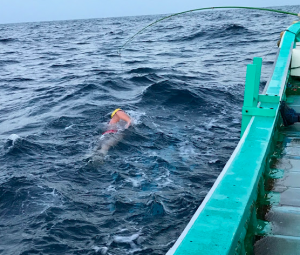 Swim Preparation Ocean Navi and the Tsugaru Channel Swimming Association understand channel aspirants may have questions about the crossing and how best to prepared before entering the water, during the crossing and afterwards. Day before the Crossing 1. There are no shops near the Tappi Misaki fishing port. Swimmers and their crew will need to buy food and drinks well outside of the Tappi area on the route between Aomori City and Tappi Misaki. The closest supermarket is about 41 km or a 45-minute drive by car from Tappi, and is called the Maeda store Kanita. 2. Next door to the supermarket, there is a homeware store called Nicot where swimmers can buy a wide variety of miscellaneous items including cushions, mats, large plastic crates, boxes, wet weather gear, hardware and other equipment. However, please keep in mind this is a very rural area and so the store will not have everything you might need or want to have for your challenge. 3. There are also two Circle K convenience stores on the road to Tappi Misaki which are closer than the supermarket. These are typical Japanese convenience stores which have basic prepared food, snacks and drinks (including beer), mostly Japanese style, but also a limited selection of sandwiches. The closest convenience store is about 12 km or a 15-minute drive from Tappi Misaki. 4. The other Circle K convenience store is about 17 km from Tappi Misaki, a further 10-minute drive away at the Imabetsu intersection where there are 2 petrol/gas stations. There is also another Nicot homeware store located next door. 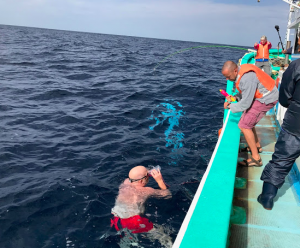 5. If swimmers would like to train in the sea to acclimatize to the conditions and water temperature, they are free to swim in most locations along the Japanese coast. The first location is on the east side of Tappi Misaki on the route from Aomori City to Tokyo. It is near the closer (to Tappi) Circle K convenience store. The second location is on the Kodomari side of Tappi, not far from the swim start. 6. Swimmers will meet with the escort boat Captain Mizushima* in front of the Dainana Koyomaru, his boat that will accompany the swimmers which will be moored at Tappi Misaki fishing port. Everyone will coordinate the start time, will discuss the swim, and ask/answer any questions. Ocean Navi will contact the swimmers to coordinate the time of the meeting, but Ocean Navi will also be in touch by email or telephone the previous day when we arrive in the Tappi area. Please confirm the meeting time and location in advance. 7. The final decision on whether or not the swim will be conducted will be made by the captain who coordinates with the Japanese Coast Guard and the fishermen’s unions. The swim will only take place on the designated day or the designated alternate date and will not be held on another date for any reason. This is the strict rule of the Association in coordination with the Japanese Coast Guard. 8. Photos or videos may be taken during the meeting with the captain. 9. The observer will check the lights to be used during night swimming. If the equipment is not appropriate, the swimmer must use the ones prepared by Ocean Navi. 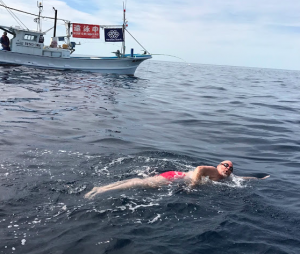 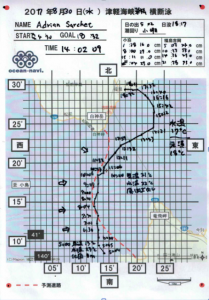