Tunnel Under The Tsugaru Channel Broken By Swiss 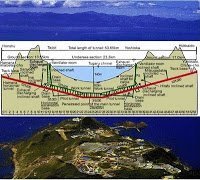 The world’s media reported today that the Swiss broke the Japanese world record in designing and building the longest tunnel in the world.

What is interesting for the open water swimming world about this news is that the Swiss’ 35.4-mile tunnel underneath the Swiss Alps broke the existing record of the Seikan Tunnel (see schematic diagram on left).

The Seikan Tunnel is the 33.5-mile tunnel under the Tsugaru Channel, one of the Oceans Seven waterways.

Tappi Misaki on Honshu is shown on the bottom left, one of the possible starting points to conquer the Tsugaru Channel, with the Hokkaido coast shown in the upper left. Due to the currents and tides, these are the best and closest points to set off on the difficult Japanese challenge based on discussions with the engineers who spent decades studying the currents, tides and conditions of the Tsugaru Channel.