Turning Green On Land To Make The Ocean Blue 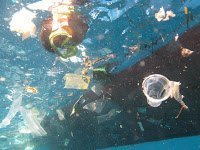 The United Nations Environment Programme highlighted plastic pollution in the globe’s oceans as one of its priority issues in its annual report.

The United Nations highlighted an urgent need for a fundamental green economy shift in a nod to environmentalists and others who deeply care about the health of our planet.

The report tells of massive amounts of phosphorus, a fertilizer needed to feed a growing global population, being lost to the oceans as result of poor farming and a failure to recycle wastewater. In turn, this phosphorus pollution, along with other uncontrolled discharges, such as nitrogen and sewage, are linked with a rise in algal blooms which reduce water quality, poison fish stocks and undermine coastal tourism.

There is also a growing concern over the negative impact of billions of pieces of plastic on the health of the global marine environment. Research suggests that the plastic broken down in the oceans into small fragments may absorb a range of toxic chemicals linked to cancer and impacts the reproductive processes of humans and wildlife.

As the world’s environment ministers head to the United Nations next week, United Nations Under-Secretary General Achim Steiner said, “The phosphorus and marine plastics stories bring into sharp focus the urgent need to bridge scientific gaps, but also to catalyze a global transition to a resource-efficient Green Economy in order to realize sustainable development and address poverty.”

The Under-Secretary General’s tone was in some ways optimistic. “Whether it is phosphorus, plastics or any one of the myriad of challenges facing the modern world, there are clearly inordinate opportunities to generate new kinds of employment and new kinds of more efficient industries.” This is quite a nod to the vision laid out by Doug Woodring of Project Kaisei.

At the same time, the United Nations described marine plastics as a toxic time bomb and urged for more intensified research on the impact of plastics entering the oceans. The report added that scientists are becoming concerned not only about the direct damage to wildlife, but the potential toxicity of some kinds of materials called microplastics or tiny pieces smaller than five millimeters or formed as a result of a decomposition of large pieces of plastic broken down by wave action and sunlight.

Unfortunately, while the exact quantities of plastics and microplastics in the oceans are unknown, the per capita consumption of plastics is increasing sharply. In North America and Western Europe, each person now uses 100 kg of plastic materials annually with an estimated increase to 140 kg by 2015. In rapidly developing countries in Asia, each individual uses 20 kg of plastic per year with a forecasted growth to 36 kg by 2015.

The report has various kinds of shocking bits of information including evidence that some plastics are not floating, but sinking and piling up on the seabed. “Plastic debris has been observed on the ocean floor from the depths of the Fram Strait in the North Atlantic to deepwater canyons off the Mediterranean coast—much of the plastic that has entered the North Sea is thought to reside on the seabed.”

The document is available at here or can be purchased here.