A Turning Point In Wetsuits 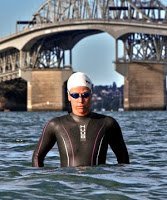 Huub Wetsuits just made swimming easier for those not accustomed to swimming, a mighty large market. 85% of triathletes do not come from a swimming background according to Professor Huub Toussaint.

In trying to lower the bar for non-swimmers to tackle the swim leg of triathlons, Huub Wetsuits launched a new line of triathlon and open water swimming wetsuits in England this week at the Triathlon Show that caters to those athletes with a poor body position.

With millions of budding triathletes who aim to get over their swim leg as quickly and effortlessly as possible, Turning Point Investments, a venture capital firm in Nottingham, England, saw a great business opportunity.

Tom Mawhood of Turning Point Investments said, “We are constantly on the lookout for businesses with potential [like] start-up businesses like Huub. As soon as I saw the proposition, I felt that this would succeed. In fact, it was so well received that within weeks of meeting we had signed terms and Dean Jackson had the first tranche of investment to start developing the product. To put this in perspective, this process normally takes up to 3-4 months.”

Professor Toussaint of Free University in Amsterdam said, “[In our testing], we saw some swimmers improve by up to 30% in the wetsuits. There is a big difference between natural swimmers and those not from a swimming background. Triathletes need increased buoyancy around the thighs and hips, whereas natural swimmers need even leg and chest buoyancy to maintain correct body position in the water, particularly to activate the kick.”

Huub Wetsuits come in two versions: one for natural swimmers and another for those who are not. There are buoyancy panels in the right places to create the optimal position and improve streamlining. The Archimedes wetsuit also offers bicep and calf release panels which further improve efficiency and enable faster kicking as well as faster removal.

When 85% of a sizable market is potentially aided by new wetsuits that automagically turn deficiencies in the water to advantages, the backing and enthusiasm of Turning Point Investments makes a whole lot of sense.

While traditional marathon swimmers have and will always frown on aids to buoyancy and heat retention in its own sport, a significantly greater number of newcomers to triathlons have no qualms seeking and using neoprene’s advantages in the open water. The challenge for these newcomers is not HOW one gets from Point A to Point B, but rather merely getting FROM Point A TO Point B safely and comfortably with whatever neoprene aids are available in the market. The two camps – the minimalist approach by the marathon swimming world (i.e., no neoprene) and the technological approach (i.e., neoprene) of the triathlon community – could not be more polar opposites.

But, it is a fact that both camps are growing globally. Increasingly at shorelines and seasides around the world, both triathletes and open water traditionalists seem to be going for training swims together and enjoying mass participation events together from England to Japan. While the open water swimmers bring the know-how and experience, the triathletes certainly bring the numbers and enthusiasm to learn and push themselves beyond the shorelines.

Because a vast majority of triathletes find success in the open water more difficult than their endurance exploits on land, the market for products like Huub Wetsuits is well-established. And like marathon swimming, its contemporary counterpart in the extreme world of sports, the market for wetsuits will continue to expand especially when athletes find the optimal mix of price, comfort, marketing and technical advantages.