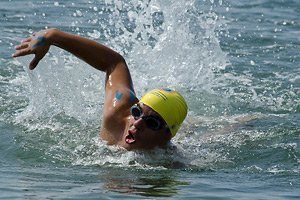 When the 87 open water swimmers from 35 countries around the world march into the Los Angeles Coliseum amid music and fireworks on July 25th among the other 7,000 athletes and coaches from 177 countries, Stevie Wonder, and First Lady Michele Obama at the Special Olympics World Summer Games, ESPN will broadcast live the Opening Ceremony.

And among the 87 open water swimmers, ESPN will broadcast a documentary on Andrew Smilley, the defending champion of the 1.5 km World Summer Games open water race.

Smilley will be racing with at least 899 confirmed spectators [to date] on the beach in Alamitos Bay in Long Beach on July 26th.

“Back in 2009 and 2010, we lobbied hard to get open water swimming into the World Summer Games. But initially people did not support the dream of Kester Edwards and Jon-Paul St. Germain. We explained that athletes with intellectual disabilities participate in open water swims around the world, but there was no documented proof. Finally, Dr. Makis Asimakopoulos asked us to visit Athens and explain why the race would be safe for everyone. We came armed with as much data as possible and Dr. Asimakopoulos listened very carefully. He asked tough questions and demanded that the level of safety was at its highest levels. For a year, we worked together with Katerina Kaloudi and Chrysostomos Giannoulakis to make the 1.5 km race as safe – and memorable – as possible. We wrote operational documents, safety plans, and drew out course designs. Katerina, with her Olympic sailing experience, was invaluable in securing turn buoys, intermediate buoys and a sufficient number of escort boats and safety vessels. Chrysostomos was relentless in making sure every detail was discussed, decided and executed – with Plans B and C in place. We instituted a POW exhibition, we practiced with the athletes, we spoke with the coaches, we had lengthy question-and-answer sessions, we discussed various scenarios with the local lifesaving staff. Ultimately, we put a massive document together with videos and recommendations that Dr. Asimakopoulos and the staff of the Special Olympics World Summer Games accepted and supported 100%. It all came together in the Bay of Marathon with documentation, video footage, and photography for future Games to improve upon.”

And things will only get better next week under the direction of Anne McLindon and Anneka Sakovich with national television coverage provided by ESPN.

ESPN will provide a total of 10 hours of coverage during the Games that runs from July 25th through August 2nd: