Twice Is Nice, Thrice Is Rolling The Dice 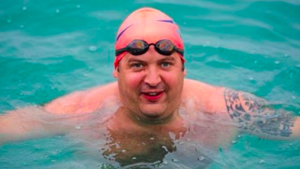 Twice Is Nice, Thrice Is Rolling The Dice

Courtesy of Lionheart, Isle of Jersey. Andy Truscott has achieved several unprecedented marathon swims over his career. But tomorrow morning, he will begin his longest, toughest and most navigationally challenging swim to date: a Round Jersey Triple, or three non-stop consecutive circumnavigations around the Isle of Jersey in the English Channel. He explained, “The start time of the 198 km Round Jersey Triple will be 6 am (UK time).  If completed, it will be [longer] than the 2006 swim of Veljko Rogošić [who completed a 171 km (106.2 mile) 50 hour 10 minute solo swim in the Adriatic Sea from Croatia to Italy].” Truscott, named one of the World’s 50 Most Adventurous Open Water Men in 2019, pioneered the 142 km Double Round Jersey, a 142 km swim that he completed in 22 hours 6 minutes in July 2019.  In that swim, his first lap one was completed 10 hours 45 minutes; his second lap was 11 hours 42 minutes [see below]. Lionheart Pilotage will escort Truscott around the swirling currents and eddies around Jersey in a swim that is expected to take between 30 – 40 hours.  To follow Truscott’s attempt, follow his progress here. Copyright @ 2008 – 2019 by World Open Water Swimming Association