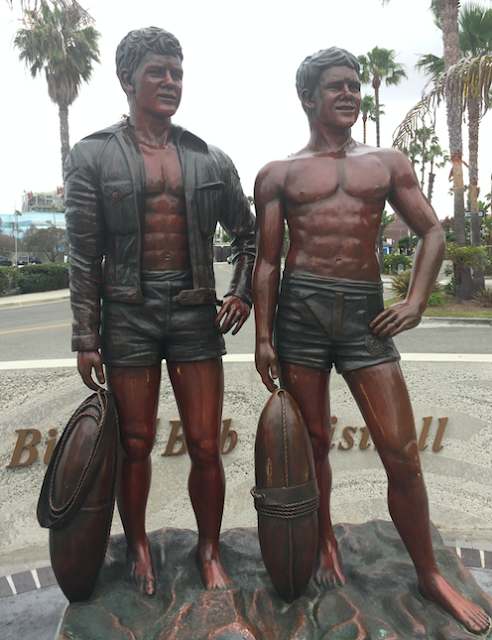 Underneath the impressive life-size bronze statue of Bill and Bob Meistrell at Seaside Lagoon in Redondo Beach, California is a plaque that explains the lives of the identical twin watermen.

“Bill and Bob Meistrell identical twins were born in Boonville, Missouri; Bill on July 30, 1928, and Bob 20 minutes later on July 31st. They started diving as kids in the farm’s pond using an oil can for a helmet, a bicycle pump and a hose for air. Bill and Bob had big dreams as Missouri farm-boys: own a submarine; be deep-sea divers; and go treasure-hunting. “Somehow, we managed all three.”

The brothers invented the first practical wetsuit in the back of their Redondo Beach shop, Dive N’ Surf which was founded in 1953. From those wetsuits their legacy and iconic surf brand Body Glove began. Bill and Bob Meistrell will always be remembered as legendary watermen, lifeguards, avid surfers and icons of the surf and dive industry. A 32″ replica of this statue is now the most sought after waterman memorial trophy in the world.“

“With their influence in getting millions of people to enjoy the ocean in wetsuits in the diving and surfing worlds, and indirectly in triathlons and ocean swimming, it is appropriate that the Redondo Beach Coastal Challenge races will start very close to their beautiful bronze statue in Seaside Lagoon,” says Steven Munatones. “Their original shop Dive N’ Surf sells all kinds of equipment, so it made sense to offer an assisted category in the 10 km Olympic distance marathon swim where swimmers can use wetsuits, fins, hand gloves, and snorkels.

While there will be 2020 Tokyo Olympic gold medal contenders like Haley Anderson and Jordan Wilimovsky and many others participating in the Redondo Beach Coastal Challenge at the WOWSA Ocean Fest in the unassisted category, there are others who will choose to wear fins or wetsuits or hand paddles or snorkels. We even will have a real-life mermaid, Merle Liivand who will use her mermaid fin to compete in the 10 km race.”

The twin brothers started off with a dream in the American Midwest and eventually found themselves heading a multi-million dollar global brand. 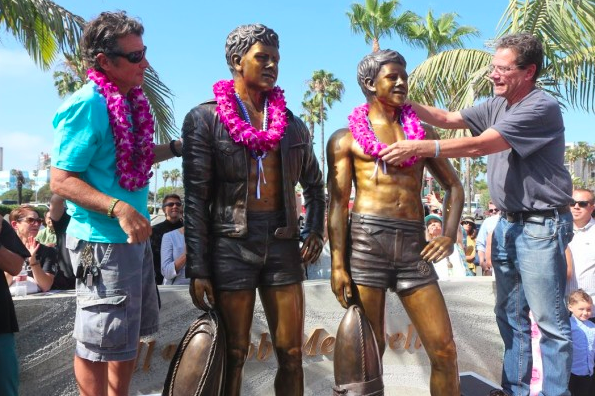 The creation of the Bill and Bob Meistrell statues were made possible by thousands of donations by local people and organizations in Redondo Beach. In the photo above by Kevin Cody, Billy and Robbie Meistrell place leis on the statues of their twin parents who founded of Dive N’ Surf and Body Glove.

Two years prior to his death in 2013, Bob Meistrell shared his 7-point advice for aquapreneurs, especially those like them who love the open water. “We love the ocean and everything you can do in it,” said Meistrell. “We’re in the Hall of Fame for diving and the Hall of Fame for surfing. For two kids from the farm, that’s a real kicker.”

#1: Set goals and stick to them
#2: Love what you do, do what you love
#3: Make a good product, sell it for a fair price
#4: Guarantee the product you’re selling and demand a guarantee from suppliers
#5: You can’t win every battle (especially with the government)
#6: You don’t get ahead by treating people badly — customers or co-founders
#7: Pick a name you can stand by