Two For Tomi, One For Canada 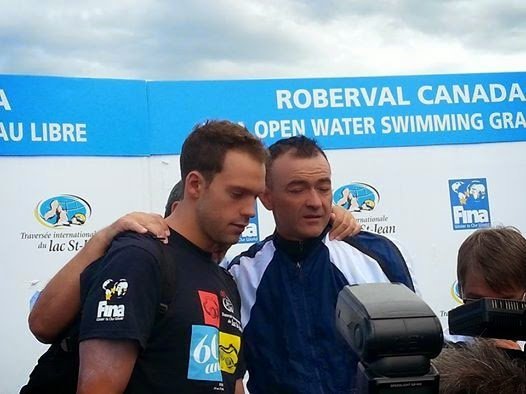 The 60th Traversée internationale du lac St-Jean was dramatic and bold this year – hands down the most exciting, the most unlikely, and the most dramatic open water race of 2014.

Not only was lac St-Jean angry and swollen with turbulence, chop, wind, and rain, but it also ended like in the movies.

Depending on one’s perspective, one could be rooting for the local guy or the old guy.

The local guy – Canadian Xavier Desharnais from nearby Sherbrooke, Quebec – certainly received the most cheers from the crowds on lac St-Jean and those at the finish in Roberval. But the old guy – Tomi Stefanovski – at the age of 43 was shredding all the old thinking that a masters swimmer cannot keep up with the world’s best marathon swimmers.

“This is what I have been looking to do,” Desharnais said after last year’s race. “It would be a dream come true to win the Traversée.”

And he did it in dramatic fashion against the most unlikeliest of foes as he initially missed the finish pad and had to retouch, giving an opportunity for Desharnais to exploit.

“I am very happy to be here, especially with the uncertainty surrounding the crossing,” said Desharnais. “It was a relief to all competitors that the crossing takes place. I hope that the Traversée will inspire other young people to excel and achieve their goals. What a feeling! To win my first [pro race] in most the most prestigious. 32 km in the worst conditions which I swam.”

Tomi Stefanovski made people shake their heads in disbelief back in 2013 when he won his first FINA Open Water Swimming Grand Prix. How could a 42-year-old with 6 shoulder surgeries win the most prestigious ultra-marathon? “I do not mind the cold or rough conditions,” observed the Macedonian. “And I can get stronger in the second half of the race.”

But he made it happen again in 2014 with an outstanding finish against a man 20 years his junior.

So the local guy and the old guy went at it like two warriors in a boxing match. And like in the movies, both became champions. Well-deserving champions.

On the women’s side, Pilar Geijo gave it a great effort, finishing seventh overall only 10 minutes behind the top men in the 32 km cross-lake swim.

The crowd appreciated the swimmers’ effort: