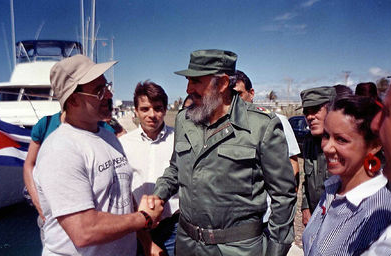 Swimmers have been attempting to cross the Gulf Stream and swim from Cuba to Florida since 1950 (including Jose Cortinas, Leo Vigil, Rolando Elejalde, Luciana Nunez, Susie Maroney, Skip Storch, Chris Green, Diana Nyad, Walter Poenisch, Penny Palfrey and Chloë McCardel). Many of them met and had to receive the permission directly from the recently passed Fidel Castro.

In 1993, the paths of Castro and two International Marathon Swimming Hall of Fame athletes crossed. Australian Susie Maroney contacted Hall of Famer Skip Storch after his 25-hour attempt to swim across the Florida Strait from Cuba to Florida in 1993.

“At the press conference in Havana before the swim, there were over 200 reporters from all over the world,” recalled Honour Swimmer Storch of New York. “That is how Susie knew about my swim [in the pre-internet era].”

On the day of the swim start, Fidel Castro unexpectedly joined Storch and his escort team on the beach. “El Supremo talked and talked at the impromptu gathering in a mixture of both Spanish and English. He didn’t look at me at all when he was speaking to the people, but he did state that no man could make the swim including me. When he said that, he looked at me right in the eyes.

But then I thanked him and his people for allowing this swim to happen. I said the swim could not be done without his support. Then Fidel said no man could make the swim but him
.”

Storch’s Coral Reef Relief Swim was scheduled to start that day, but stiff winds had picked up in advance of a tropical depression and led to a delay in the start. “Before the swim, we had planned to swim with the Gulf Stream and land in Miami, but then there were political protests in Miami so we decided that I should land anywhere that I could.

We didn’t start that day, it was way too windy and rainy. But I had many things going against me on that swim. The winds were terribly strong and I ended up swimming right into a swirling eddy right from the start throughout the entire 25+ hour swim. I really didn’t stand a chance; it was tough going, but I gave it my best shot
.”

News of Storch’s attempt reached Maroney who later called him and asked if she could use his shark cage that was designed and built by Fibber McGee in Florida. “She asked if I was going to try the swim again. When I told her that I was not going to do so – I felt that I was used politically. She was welcome to use my shark cage.”

Maroney eventually used the cage – under much more favorable conditions – several years later. She made it across in a 180 km (111.8-mile) swim of 24 hours 31 minutes in May 1997. The crew of the then 22-year-old covered the front of the cage with a mesh in order to avoid the jellyfish that had infested her course.

But Storch remembers vividly his initial meeting with the recently passed leader of the Cuban Revolution. “I am not sure how my words to Fidel were translated on the beach in Cuba back in 1993 when I thanked him for his help and approval, but Fidel took it as I called him a god. And the god could make it across. This seemed to make him happy.”

Maroney was later invited to a 5-hour dinner with Castro at his palace in 1998. She described the occasion to The Advertiser. “It was an honour being invited to the palace and having dinner with him after both of the Cuba swims. I remember he was so interested in Australia and how much we paid for electricity and he had a great sense of humour, joking about kangaroos. For us he was a man that loved sport and loved Australia.”

Footnote: Skip Storch [shown above shaking hands with Castro] is fit as he has been in decades, slimmed down and faster due to his 5-day-a-week swimming regimen in New York. Susie Maroney was recently wed to quadriplegic philanthropist Perry Cross in a ceremony in Bryon Bay in their native Australia.