Two Men, Two Maidens, And A Monster In Memphremagog 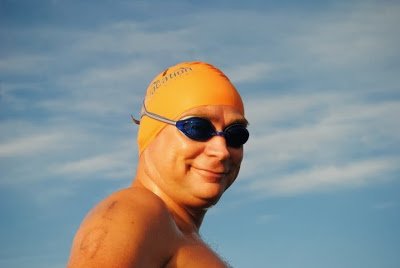 The Northeast Kingdom Open water Swimming Association announced its swimmers in the 25-mile In Search of Memphre across Lake Memphremagog between Newport in the state of Vermont and Magog in the province of Quebec:

Swimmers will depart at midnight from either Newport or Magog, depending on which way the wind is expected to blow. Depending on weather conditions, the swimmers are expected to be in the water anywhere from 11 to 18 hours on September 7th.

* 31-year-old Sarah Thomas from Colorado fresh off of her unprecedented two-way crossing of Lake Tahoe.
* 38-year-old Humphrey Bohan from New Jersey constantly on the lookout to increases his distances and challenges.
* 29-year-old Bethany Bosch of Vermont is ready for anything after training at 2 Cork Distance Swim Camps
* 46-year-old Robert Fernald (shown above) of New Hamphire is looking to go beyond to his next level.

Thomas tells Phil White of NEKOWSA, “Open water swimming is what I love to do. It makes me happy. The Catalina Channel in 2010 was my first realization that I can do more things than I ever dreamed, and it’s been an amazing journey since then.

Bohan explains, “Training for the Little Red Lighthouse 10K in 2009 and then swimming that race up the Hudson River and under the George Washington Bridge, inspired me. I had finally found what I wanted to do athletically.”

Bosch tells of her reasons for participating, “Of all of the places in the world that one could swim, it is both inspiring and wonderful to have such a beautiful, long distance swim right in your backyard. I want my life, everything I do, to make a difference in this world – to have an impact and purpose beyond myself.”

Fernald says, “As far as my swimming is concerned, this event will help me go beyond my next limit. I have plans of other longer swims around the world, but Lake Memphre is just a few hours away.”