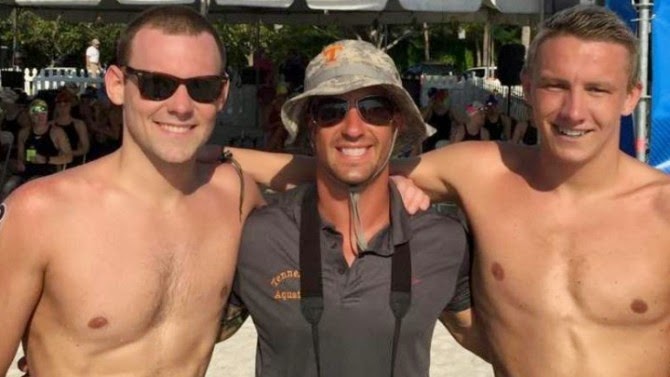 Despite over 500 American colleges and universities that has varsity swimming teams [see partial list below], there are only a handful of collegiate coaches who enjoy, focus on, and study the sport of open water swimming.

While USC’s Catherine Vogt and Southern Illinois University’s Rick Walker are the most often appointed head coaches of the USA Swimming national open water teams since the 1990s, and coaches like Jack Fabian and Seth Huston are always developing athletes into astute open water strategists, an emerging de facto dean of the open water-oriented collegiate coaches is University of Tennessee’s Tyler Fenwick.

Fenwick is now preparing for a high-level, high-altitude training camp for world-class distance swimmers at Colorado Springs, Colorado. With all the resources and venues at his disposal, Fenwick’s camp is like a supercharged Battle Training distance camp in Germany, originally created by Dirk Lange.

From May 18th to June 8th, Fenwick will coach many of the top open water athletes in the USA, Canada, Tunisia and Australia using the high-tech pool at the United States Olympic Training Center as well as utilizing local lakes for his intense training plans. “I love open water swimming,” Fenwick readily admits. “I’m constantly trying to find ways to promote the sport and get swimmers excited about open water. The opportunity presented itself to bring some of the top distance swimmers in the world together and I jumped at it. It should be a fantastic camp. Some of the sport’s best ambassadors will be in Colorado.”

Tyler Fenwick shown above with Alex Meyer and David Heron.