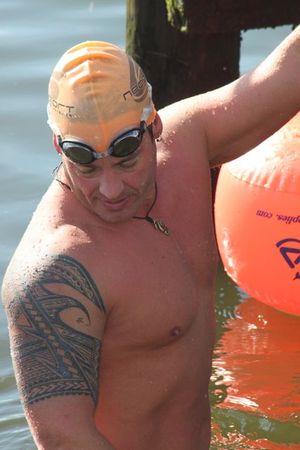 “We are down here in the territory this time, partially as part of the National Marine Sanctuary Foundation Collins Grant, which is supporting us in the filming of a couple of small documentaries to focus on capturing the Fa’a Samoa and the Samoan connection to the ocean, their islands and their community and families,” said Chase.

“Our goal is to visit places around the island as we are doing a couple of long distance ocean events again. We will be interviewing people and creating a documentary that we will then show in other parts around the world. The documentaries will be part of a library of films that the National Marine Sanctuary Foundation will use.

Chase is also launching the Blue Journey initiative which connects people to the oceans. “I will be spending a whole lot of my time working with the Department of Public Safety Marine Patrol. We will also being doing some group swims with members of the youth over in Leone and over on the East Side of the island as well.

This is part of a legacy that Chase has kindly left behind many places he has frequented.

Photo shows Chase’s traditional tatau on his right arm is similar to a Samoan coat of arms with the lighting bolt cutting through the waves.