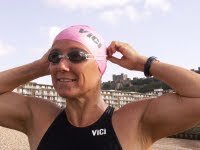 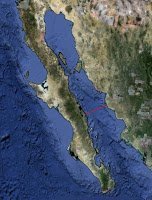 Come mid-June on the two different sides of Mexico, Paul Lundgren and Penny Palfrey may be swimming into history.

Both are scheduled for solo ultra-marathon swims in warm waters: Lundgren is attempting an unprecedented 76-mile (122 km) solo swim across the Sea of Cortez (see map below), starting on the eastern side of Baja California and swimming towards the Mexican mainland. Sometime after Lundgren’s swim, Palfrey will take her own stab at history in her 103-mile (165.7 km) solo swim from the northern coast of Cuba to the Florida Keys.

While Palfrey will have to swim across the Gulf Stream in the Straits of Florida, Lundgren will make his way across what is thought to be one of the most diverse seas on the planet that is home to more than 5,000 species of macroinvertebrates. Both ultra-marathon swimmers have deal with sharks and jellyfish of all types on their solo swims as well as sleepless nights on their multi-day adventures.

Both are guided and protected by experienced crew members, from Jeff Kozlovich on Palfrey’s side to Mark Montgomery on Lundgren’s side. Kozlovich, a veteran lifeguard from Hawaii, has been aside the 50-year-old Australian wonder on her swims between Oahu and Kauai as well as in the Cayman Islands where she encountered both jellyfish and sharks. Montgomery, a veteran lifeguard and endurance athlete who trains daily with some of the most experienced ultra-marathoners in the world, is similarly prepared to expect the unexpected. “It always seems that each emergency is a surprise. There is no substitute for dealing with emergencies than to be mentally and physically prepared. I have been going through my head the possibilities and what I will do in such cases.”

Both athletes and their crews know that the anticipated 40+ hour swims is not only a physical battle and operational challenge requiring navigational skills, but also it requires a calm emotional state and mental focus shared by only a few individuals on Earth. Montgomery talks about Lundgren, “He is prepared as well as can be, and in the best shape of his life. He was born to this type of adventure, as I never knew anyone that could just go all day at one pace like Paul, a trait that will serve him very well this June.”

Neither athlete will use a shark cage, although Palfrey usually is escorted by Shark Shields, one of her sponsors. But sharks, usually curious and just cruising around, do come around in many ultra-marathon swims.

During the 19th hour of Diana Nyad‘s attempt between Cuba and Florida, a curious oceanic white tip shark approached her protective flotilla of five boats. The shark was initially observed by a spotter aboard the last boat in the rear position, “The shark was swimming 2-3 meters under the surface with its distinctive white tips reflecting off the canvas of royal blue. Fortunately, Diana’s safety team spotted the 4-5 foot endangered shark lurking in the crystal clear water well in time for preventative action.”

Safety diver Rob MacDonald of West Palm Beach, Florida jumped to action and dove immediately into the water to protect Nyad. MacDonald showed no hesitation and apparently had no worries or regrets. He just professionally moved into a heightened state of alert.

MacDonald entered the glassy flat doldrums under cloudless skies with free diving fins. He was armed with only a long pole with a soft end to it. He moved as stealthily as humanly possible, kicking silently and smoothly with his long fins, snorkel put like a periscope, and long pole armed at the ready. An inflatable raft followed in close proximity with a crew aboard who were all mesmerized by the gracefully moving shark and the equally courageous safety diver.

But it appeared to be not an inhospitable encounter, but rather merely an expression of temporary territorial rights. “I didn’t want to hurt the shark. The sharks are our friends,” calmly explained MacDonald afterwards. “We just wanted to keep the sharks away from Diana. I never saw any aggression from the shark. While I approached the shark, it was so beautiful. I wish I had my camera. The shark never lowered its pectoral fins or arched its back. When a shark does that, it is ready to attack.”

To the disbelief of the crew watching from the escort boats, MacDonald quickly dove below the surface like a protective mother bear. He faced the shark eye-to-eye, swimming at it head-on, never letting the shark out of his sights. The eyes of the shark and the human were locked on each other, apparently playing a game of truth-or-dare. The two faced off in the silent arena underwater, each respectful and totally unafraid of one another. The shark clearly sensed a formidable denizen in the Caribbean depths as MacDonald never flinched. Like two enemy jet pilots swooping at one another in the skies above, MacDonald and the shark locked onto one another as they both were gaining speed towards a clash.

The crew held their breath for both combatants dove deeper and became more and more obscured underwater. No one knew or could imagine what the next move was going to be.

In a very real sense, down below the surface of the Caribbean blue, mano-a-mano was replaced by mano-a-apex predator.

While the shark’s pectoral fins remained static, MacDonald made a forward thrust with his soft pole in front of him. In the depths, he appeared as a knight with his lance out against a fast-moving tank. But the shark was the first to flinch. “But that (move) was enough to convince the shark to swim off. I never hit it. He just dove down to 60-70 feet and headed off in the opposite direction of Diana.”

Safely separated, the coast was clear and Nyad kept stroking on hour by hour, mile by mile, away from the shark and closer to her Xtreme Dream destination in Florida as MacDonald climbed nonchalantly on board to the whoops and hollers of Nyad’s crew where he readied his camera for the next encounter.

And so it is in the ultra-marathon world where adventurers like Lundgren, Palfrey and Nyad forge on and expect the unexpected under the watchful and experienced eyes and protection of their escort crews.