Underneath The Surface Of Lake Tahoe 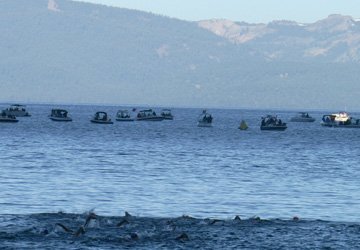 The Trans Tahoe Relay is one of the most popular open water swims in America. High up in the Sierra Nevada Mountains between the states of California and Nevada, the beautiful Lake Tahoe draws hundreds of six-person teams to its annual 10-mile relay race.

While it is not a professional marathon race, the competition is fierce for bragging rights among the adult swimming community.

But most recently this competitive spirit has led to disputes and misunderstandings that have resulted in national governing body reviews and disciplinary panels. The accusations between the race organizers about some of its participants and teams have led to changing the race from a recognized U.S. Masters Swimming race to a non-sanctioned, independently run event by its host, the Olympic Club of San Francisco.

In 2008, the RCP Tiburon Milers set the existing record of 3 hours 10 minutes. The team consisted of former Stanford University swimmer Noah Sakamoto, former Indiana University standout J.K. Koehler, Pan American Games double gold medalist Bob Placak, Randy Eickhoff, and Evgeny Bezruchenko. On a gorgeous day with little winds, the group of five under the leadership of Placak averaged a little more than 19-minute miles in the 6,225-foot (1,897m) lake. They set the bar that has since been chased by teams far and wide.

The only two teams within striking distance of the RCP Tiburon Milers include the teams sponsored by the Tattersalls Masters of Australia under the guidance of Peter Thiel and a local San Francisco Bay area rival, the Tahoe Eleven Milers led by entrepreneur George Tidmarsh.

The favorite RCP Tiburon Milers led from start to finish over the Tidmarsh-captained Tahoe Eleven Milers. After the race was over as the swimmers had moved on with their busy lives, Trans Tahoe Relays race director Paul Carter disqualified three teams. Carter decided that all three teams were disqualified in a post-race decision because their final swimmers did not finish with a timing chip. This decision, questioned by Placak, was final and the results were officially modified.

Placak brought up the fact that U.S. Masters Swimming-sanctioned races do not require timing chips, but Carter insisted on an Olympic Club rule requiring a finish with the mandatory timing chips. “I recognized that it was not right that three teams were disqualified. The problems began when I brought up the fact that chip timing is not required by USMS rules in a sanctioned event,” recalled Placak. “In the official results, these teams still have never been reinstated.”

According to the race rules, the last relay swimmer must stay in the water if they reach the final buoy that is positioned 400 meters from the finish. Because of the nature of the relays, teams do not always know what swimmer will reach the last buoy or when they will reach this point. But it remains the responsibility of the final swimmer to attach the ankle timing chip before they finish. The three teams in question did not abide by this rule.

The disqualification by the Trans Tahoe Relay organization committee of the three teams left a bad taste with Placak and a number of other competitors in the event.

“The night before the race, the officials told us that ‘the application by the RCP Tiburon Milers cannot be processed.’ But we had Plan B.”

One of the RCP Tiburon Milers, Luane Rowe, was entered on a team called the Bay Area Sharks (note: Tiburon means shark in Spanish). Like many teams, the final members of the team were decided upon at the last minute due to work schedules, illnesses, injuries, and all the other unexpected happenings that occur in the lives of adult swimmers. “Essentially, the RCP Tiburon Milers because the Bay Area Sharks,” recalled Placak. “Luane Rowe and her mother received the timing chips and t-shirts at the registration pick-up and we got ready to swim as the Bay Area Sharks.”

The Bay Area Shark team of six got to the start line and swim like mad in the 2011 race. The team shot out into the lead with Australian Michael Sheil swimming fast. They held onto a 10-minute victory with Eric Nilsson swimming the anchor leg.

Their 3 hour 28 minute victory, however, was short-lived. One hour after the race was completed, Placak heard rumors that his team was disqualified without explanation. “We couldn’t figure out why we were DQ’ed,” said the puzzled Placak.

They clearly won the race hands down, but race director Carter disqualified the Bay Area Sharks within 10 minutes of their victory. The decision was not informed directly to the Bay Area Sharks, but word go around at the finish that the fastest team on that day was stricken from the official results.

Placak approached members of the rules committee for clarification, but no one gave him a definitive answer. “No one told us why we were disqualified,” said Placak. Weeks later, it was officially determined that the disqualification was due to the fact that the Bay Area Sharks swimmers reportedly forged the signatures on the application form.

Placak was curious. “They were in fact all of our signatures. Did the Olympic Club race organization suddenly become signature experts? How did they make this determination? Did they compare our signatures with other documentation?”

It is unusual and short-sighted for any participant to ask other individuals to forge their signature in an attempt to circumvent the straightforward application process. It also seems far-reaching for an organizer to investigate the falsification of signatures of a standard entry form. But the swimmers were who they said they were. Furthermore, these swimmers had previously participated in the Trans Tahoe Relay. There was no hiding of a ringer.

But the decision and disqualification stood.

Placak and his teammates could not believe the ruling. But the Olympic Club was not about to change its ruling. The two sides were at a standstill.

The RCP Tiburon Milers were out to retain their title in 2012, but the Olympic Club was equally – if not more – intent to keep Placak and his teammates out of the annual race. The terse decision of the Olympic Club was that the RCP Tiburon Milers could not participate in the race. As a private club holding a privately held event, the Olympic Club had every right to vet and accept any and all teams and individuals in its race. The only problem was that the Trans Tahoe Relay was sanctioned by U.S. Masters Swimming while Placak and his teammates remained members of good standing.

After several months, the Board determined that the Olympic Club must reinstate the 2011 results of the Bay Area Sharks. It was determined at the local level that the Olympic Club could not disallow the Bay Area Sharks in the race. Its relay swimmers were all members of good standing in U.S. Masters Swimming and there were no grounds for barring them for the Trans Tahoe Relay.

Furthermore, the U.S. Masters Swimming Board of Review determined that the Olympic Club must issue a letter of apology to the Bay Area Sharks members and reinstate them in the official results. But the Olympic Club and its organizers remained adamant that the record holders were no longer welcomed in its annual race and that no letter of apology would be considered, drafted or issued. Discussions continued, but it was clear that there was no welcome mat for Placak and his team.

The Olympic Club did not reinstate the results nor did they reverse the disqualification or issue a letter of apology. The Olympic Club simply would not process the RCP Tiburon Milers / Bay Area Sharks entry in 2012.

But possibly because oversight and governance were still in the jurisdiction of U.S. Masters Swimming and it was determined that the relay members could not be barred from a USMS-sanctioned event, the Olympic Club decided to terminate its long-standing sanction with U.S. Masters Swimming weeks before the race.

With that decision, Placak was left standing onshore, but his competitive temperament was too great for him to sit passively by. The world-class swimmer who had participated in 20 out of 25 winning relays in the Trans Tahoe Relay wanted to compete and swim fast. He did not want to be left standing high and dry on the shore. So yet another Plan B was hatched.

This time, Placak came up with the International Sharks, another English-language play on the original Tiburon name. “What is right and what is far?” asked Placak. “I have competed in this race for 25 years. It is a competitive race and we train year-round to swim well. In 2012, we had Vinny Donnelly, Brooke Bennett, J.K. Koehler, Michael Sheil, Evgeny Bezruchenko, and Eric Nilson on the team. I wanted to swim, but this year, I was just out there on the escort boat.”

The six swimmers headed to the start of the race and took their position behind the Tattersalls who led in the front of the pack. The roundabout entry was not taken lightly by the Olympic Club organizing committee – and neither was their second-place overall finish to the Australian rival Tattersalls.

Again, Placak’s team was disqualified in what was becoming an annual tradition. Tempers simmered on the shore. “It is our race and we can do whatever we want,” said a race official.

“Can you show us the rules? Where are they written?” asked the disqualified swimmers. Later, the Rules Committee chairman sent a letter that stated Ryan Sullivan displayed unsportsmanlike conduct and was disparaging to an Olympic Club race director during the race. Note: the allegation was later proved improper as Ryan Sullivan was nowhere near Lake Tahoe on race day and was not part of Placak’s team.

“We accepted the disqualification. What can you do? It is their race,” said Placak. “But after the Olympic Club lost its appeal with U.S. Masters Swimming, they just cancelled the sanction process and got their own race insurance. Just before the 2012 race, the Trans Tahoe Relay became a non-USMS sanctioned race, but everyone still paid the $46 fee.

At the end of the day, life is sometimes not fair, but in sports, we all wish everyone is treated fairly and officiated fairly. Swimmers have the right to expect a fair and objective process when competing in a fun amateur event
.”

There are rules and procedures. The rules are simple to formulate and follow. But when disagreements occur and interpretations can differ, perhaps it is time to establish an objective third-party system that can fairly and quickly adjudicate issues. Ideally, the national governing bodies like USA Swimming, U.S. Masters Swimming and USA Triathlon can serve in these roles, but the volunteer-driven organizations often cannot move quickly and do not have any representation in non-sanctioned events. Like calls in land-based sports, swimmers want a quick, objective resolution to matters that concern them.

The U.S. Masters Swimming National Board of Directors has now rendered its final judgment on the three appeals made by the Olympic Club and its long-standing problems with the RCP Tiburon Milers, Bay Area Sharks, and International Sharks. The Bay Area Sharks were instituted as winners of the 2011 race. Even though the board of directors rules in the favor of the RCP Tiburon Milers, the simmering differences had become adversarial.

In a sport where camaraderie rules, where swimmers help each others as swim buddies and kayakers, where smiles and handshakes dominate the finish line, it is hopeful that those days will return to the Trans Tahoe Relay.