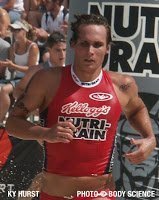 While his 24 competitors in the Olympic Marathon Swimming 10km go up and down pools around the world, 2012 Australian Olympian Ky Hurst has, without a doubt, the most unique training regimen of all the world’s elite marathon swimmers.

It works for him…and it looks quite fun.

But competing on the Australian ironman life saving series is tough work where speed, endurance and keen sense of ocean awareness are honed, all which help prepare Ky well for the rough-and-tumble world of 10 km pack swimming around a compact course at the 2012 London Olympics.

Throughout the ironman series, Ky builds up plenty of experiences that can serve him well in the trenches against his pool-oriented rivals in 10K marathon swimming races. In the Kellogg’s Nutri-Grain IronMan Series in Newcastle for example, Ky faced a number of competitors in the sprint eliminator rounds where he compete back-to-back-to-back-to-back races within 10 minutes of one another.

The Eliminator is a knockout format with four races of 10-12 minutes in duration. Four athletes will be eliminated each race, with the winner of each race choosing the first leg of the next race.