Up And Down The Coast Of California 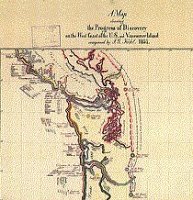 469 years ago, Portuguese-born João Rodrigues Cabrilho (Cabrillo in Spanish) and his crew were the first Europeans to explore the west coast of America on behalf of Spain.

Cabrilho sailed northward in June 1542 from the west coast of Mexico and reached San Diego in September, becoming the first European to set foot in the modern-day state of California. He sailed with three ships the 200-ton galleon and flagship San Salvador, the ship La Victoria (c. 100 tons), and the 26-oared fragata San Miguel, and a week later he reached Santa Catalina Island which he named San Salvador after his flagship.

The next morning, he sailed to San Pedro Bay across the Catalina Channel and then headed northward to Santa Monica Bay. Up the coast he sailed past Anacapa Island and Monterey Bay, but he missed the entrance to San Francisco Bay. Mariners continued to miss San Francisco Bay for the next two centuries and more.

Similar to Cabrilho, Vito Bialla will captain a team on an expedition and adventure along the California coast filled with risk, rewards, dreams and danger.

From San Francisco Bay to Santa Barbara, the band of six aided with the modern conveniences of a motorized flotilla will not sail but swim 339 miles without neoprene.

Like Cabrilho and his men, Vito and his crew of Joe Locke, David Holscher, Kim Chambers, Phil Cutti, Darrin Connolly and Patti Bauerfeind will be true modern-day explorers and adventurers.