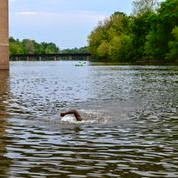 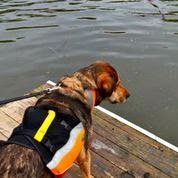 “It was a perfect weekday opportunity to hone your racing skills, work on your pacing, positioning, and drafting, and increase your navigational IQ,” says race director and former USA Swimming national open water swimming team member John Kenny. “These races are a perfect way to gain open water swim experience before the big triathlons of the season.

We had unusually strong currents with about 4 times the normal river flow with a good bit of sticks and branches in the water, but we were able to steer racers clear of the worst of it. There were a few swimmers who went sans wetsuit, always the tougher ones of the group.”

Plus a volunteer watch dog.

While the focus was on the water, it was the post-race barbecue that made the athletes really pick up the pace. “Our grill ran out of propane and the mosquitoes were swarming like crazy. Racers scattered pretty quickly. Next time, we plan to bring some bug spray and citronella candles when we anticipate the water to be much warmer and calmer next month, so we can’t wait to see who else comes out to race with us.”

Mike Conlon of Broomall, Pennsylvania won overall. “I came up through Foxcatcher and Suburban Swim Club. I swam at Widener University focused on distance events along with butterfly and individual medley,” as a means of explanation for his strong distance base.

Former swimmer Alyson Freeman from Oreland, Pennsylvania won the women’s division understanding it was a means to an end and a joy in itself, “The first improvement I will make towards my racing strategy is to not wear my seven-year-old daughters goggles. I couldn’t see 5 feet in from of me from the start of the race. So, if it weren’t for the race director’s bright green shirt I wouldn’t have been able to finish. I am 39 years old married to a wonderful man, mother to three energetic kids. I love watching and participating in any kind of sport. I grew swimming on various teams throughout Connecticut. I took a few decades off from serious swimming and found myself missing the pool. So, I joined John [Kenny]’s masters swim program. I love being outside and thought open water swimming would also be a fun challenge.”