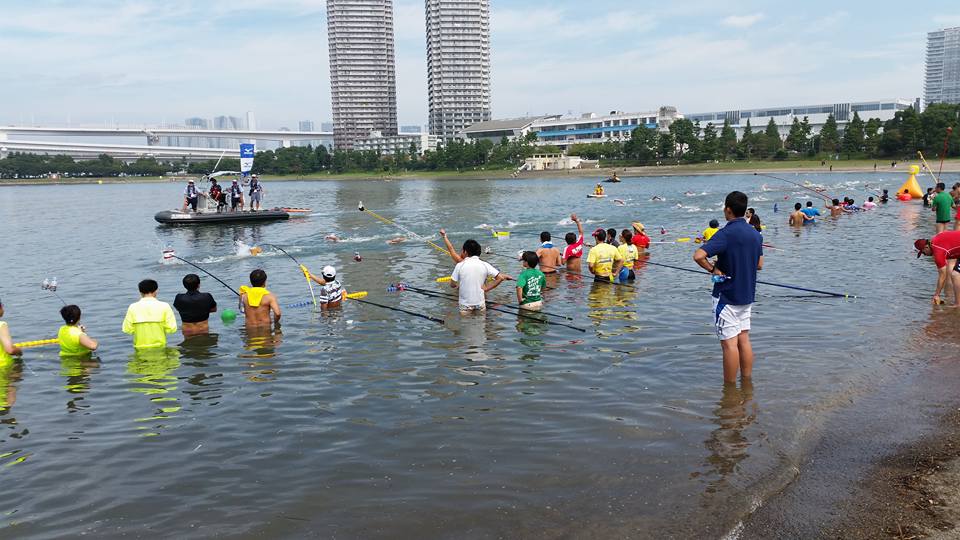 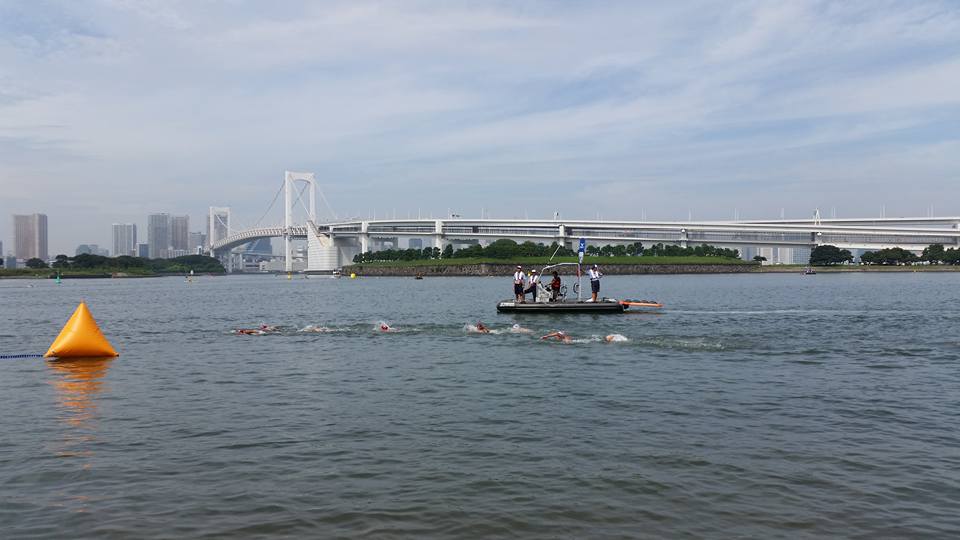 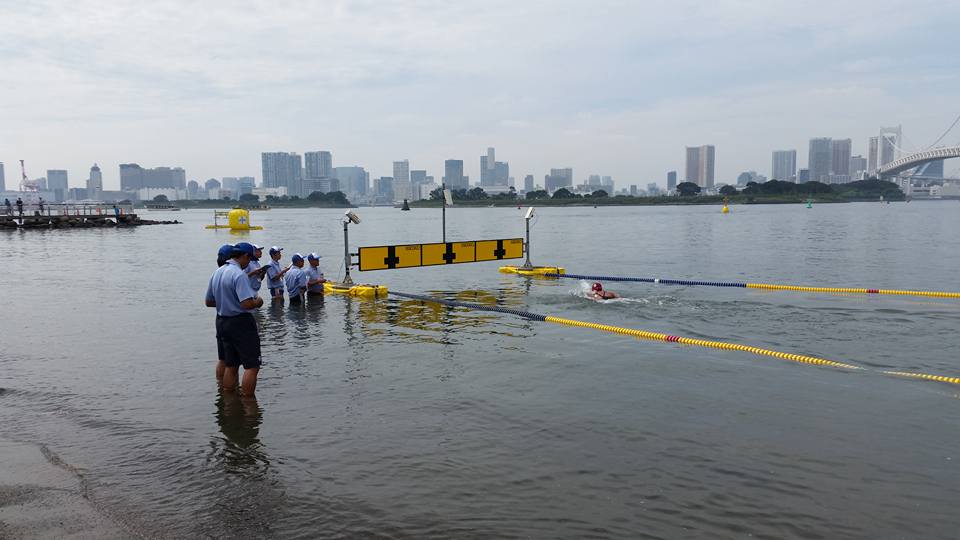 International Olympic Committee Vice President John Coates visited Tokyo and discussed the water quality of Odaiba Marine Park where the Olympic 10K Marathon Swim and the Olympic triathlon will be held at the 2020 Tokyo Olympic Games.

“It was a welcomed visit,” said Steven Munatones. “After all the public complaints about the water quality of the Copacabana Beach before the 2016 Rio Olympics, the water quality in Odaiba at the 2020 Olympic venue is a very real and troubling issue that people who have swum in Odaiba know well. The situation there is known by Japanese swimmers who have previously competed in events there – and gotten sick or been taken to the hospital. So the attention to the pressing issue is greatly appreciated since FINA has done nothing.”

After the bacteria counts were found to be higher than acceptable – and publicly reported as such, the local officials blamed the poor water quality on three weeks of rain in August. While the rain was unusual and greater than average, the resultant urban runoff had a direct impact on the amount of bacteria.

“Any coastal area next to a large municipal area hit with several days of rain experiences this problem of urban runoff,” said Munatones. “With the number of cars and trucks on the roads and the tens of millions of people living, working and visiting Tokyo on any given day, it is a given fact that the water quality in Odaiba drops when it rains in Tokyo. This is to be expected so if it rains in Tokyo during the Olympics, the open water swimmers and triathletes will be swimming in a disgusting amount of murky, polluted water.

I have swum in this area before and know the situation. The Japanese swimmers also know about this issue, but it took the IOC to bring this issue to the public. Neither FINA nor the local organizing committee or other national governing bodies had previously addressed this important issue.”

But, as expected, there was official pushback and denial of the fundamental problem.

Koji Murofushi, a Japanese Olympic champion in the hammer throw and the sports director of the 2020 Tokyo Olympics organizing committee, addressed the issue that was reported by Reuters, saying that changes to the dates or times of the triathlon and marathon swim could be considered in response to weather conditions, but “there is no need to change the venue. The proposed improvement measures are sufficient. Athletes can perform at their best feeling very safe.”

The Tokyo metropolitan government may install triple-layer screens in the water in Tokyo Bay that serve to reduce the quantity of fecal coliforms flowing in from offshore during periods of light rain. The government officials also said they would increase the storage capacity of a Tokyo Bay sewage treatment facility.

In summary, Coates promised, “The health of the athletes in [triathlon and marathon swimming] will not be prejudiced in any way.”

Over a decade ago, there was an international relay race across Tokyo Bay, near the Odaiba Marine Park. American coordinator Jim Anderson, the former race director of the Waikiki Roughwater Swim and event director of the 2000 FINA World Open Water Swimming Championships in Honolulu, recalled the water quality of the bay. “We noticed that people were not allowed to swim where the race was held so we brought it up to the attention of the race officials. They said, ‘It’s okay. The water [quality] will be good on race day. Not the day before, not the day after, but it was OK only on race day.”

The triathletes and marathon swimmers at the 2020 Tokyo Olympics will have to hope for the best too.

FINA responded to the IOC report with the following statement, “As the world governing body for aquatic sports, FINA will keep working closely with the Tokyo Metropolitan government and Tokyo 2020 Organising Committee to ensure the best available venue and environment for the marathon swimming events in 2020.”

“Odaiba is located right in the middle of a metropolitan area of over 20 million people – very close to an international airport and acres and acres of man-made reclaimed land. While the Japanese wastewater treatment facilities and technology is sufficient for most human activities, the rivers that run through the Tokyo area around Odaiba all pour into Tokyo Bay. Besides being a heavily commercialized and industrialized area, land reclamation around this area has been carried out since the last 18th century. The water is just not clean,” said Munatones. “While swimming officials have visited the site and made a visual inspection noting that no debris was in the water – bacteria and urban runoff simply cannot be seen. It should be measured by independent parties.

The Olympic marathon swim and triathlon swim leg will take place along a promenade where tens of thousands of fans can cheer for the triathletes and open water swimmers. The water should be comfortably warm in the summer (30°C+) with only a very slight bit of tidal action and very low potential for mild wind-generated surface chop. The air temperature is expected to be toasty warm and extremely humid. Hopefully, it will not rain before or during the Olympics. Because if it does rain, the water will become too polluted. Imagine if the race day is changed only days before the scheduled races?
“

Lots of open water athletes around the world are counting on showcasing their talents in front of millions of fans at the Tokyo Olympics – especially and probably none more than hometown open water swimming hero Yasunari Hirai who finished eighth in Rio: 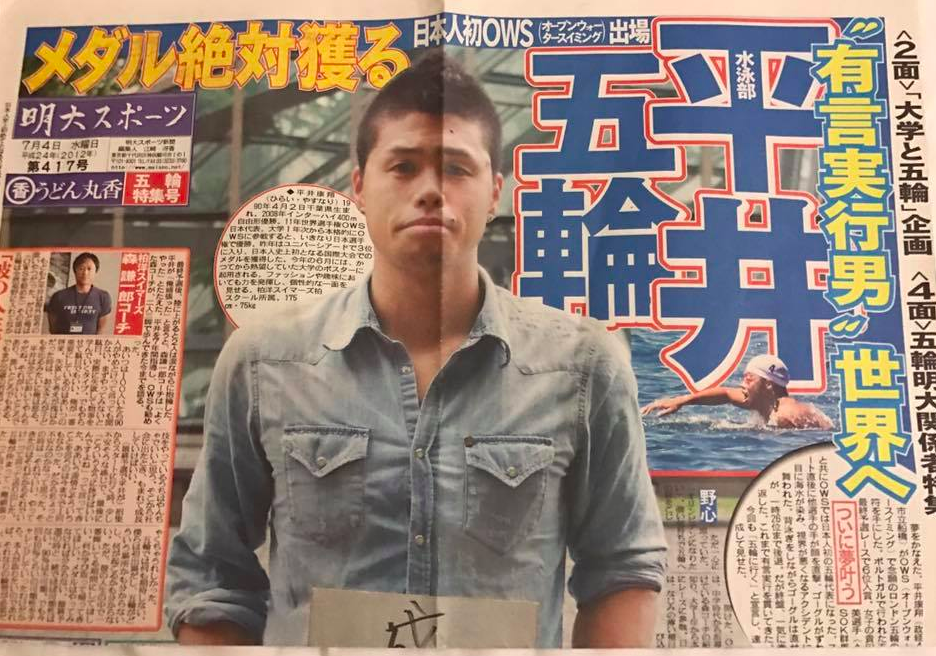 Photos are from the Japanese national open water swimming championships held in Odaiba in the summer of 2016.