The feedback, from the athletes was outstanding.

“...I have just returned from the Inaugural 25K Open Water Nationals held at the Morse Reservoir outside of Indianapolis this past Saturday. It was an absolutely superbly organized and unforgettable event. The race director, Dick Sidner, went to extremes to make sure that every detail of the experience was just perfect, and he was ably assisted by members of his family, English Channel swimmer and author Marcia Cleveland, and others. The event was held on a well protected part of a very scenic reservoir/lake. Every swimmer who did not come with a kayaker, was provided with one (or more).”

“The 5 x 5K loop was measured with the finest of precision. When a fellow swimmer and I arrived a couple of days early, Dick invited us to his home and took us for a tour of the course in his pontoon boat. For the entire four days we were in town, Dick, his wife Lisa, his mother-in-law, and the other organizers treated us like family. The race was very safe. The field was incredibly strong. The kayakers did a great job.

When I finished the race I hugged Marcia Cleveland, I hugged my kayaker Chris who provided me with so much encouragement, and I wanted to hug everyone else who made this event so memorable – thanks to all of you,” wrote Jon Lenchner (shown on left). 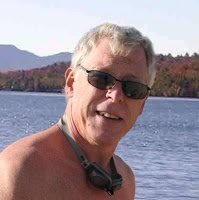