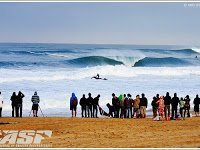 Open water swimmers are always thinking about the water conditions as they head to the shoreline.

One convenient way to know what you might be swimming in is to check SwellWatch or one of the numerous other online surf report sites with worldwide swell charts and analyses of the water conditions.

The SwellWatch site has a good technical section on wave dynamics and high-resolution swell models overlaid on a completely interactive, 3D-capable Google map of the planet.

With information from more than 7,000 tide locations around the world, 4,000 pre-programmed surf spots, easy-to-use buoy readings, wind information, and spectral charts, SwellWatch is greatly appreciated and widely used by serious surfers…and can also be used by serious open water swimmers who train along the ocean coastlines of the world.