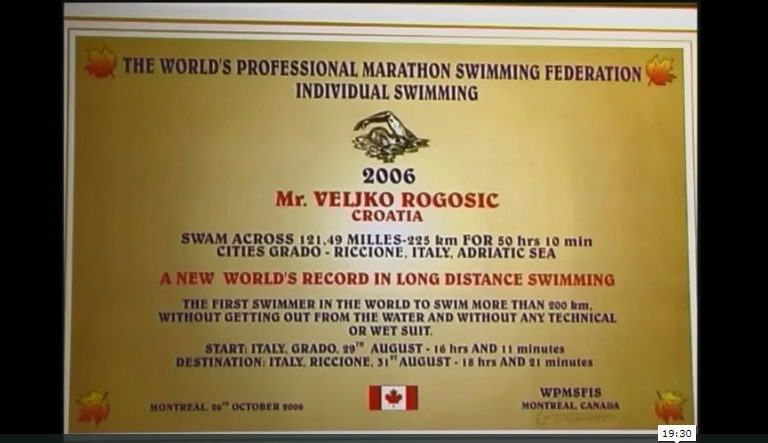 “He couldn’t possibly do it.”

“No way, she must have jumped on the boat.”

“There is no documentation or proof of the swim.”

“No GPS record exists and no Observer’s Report was posted online.”

These are the most common reasons why contemporary marathon swimmers do not occasionally recognize swims in the past by swimmers of earlier generations.

When reporting on a swim, especially those done by non-English speakers and those who do not post information regularly online or on social networks, the Daily News of Open Water Swimming considers the following information:

1. Documentation in the native language of the athlete,
2. Comments, recollections and first-hand observations from coaches, crew members and escort pilots (in the absence of an Observer’s Report).
3. The track record of the athlete.

Veljko Rogošić is a classic case where some in the marathon swimming community have stated online and in private circles that he did not complete his longest swim on record: a 225 km (139.8 mile) 50 hour 10 minute solo marathon swim across the Adriatic Sea from Grado, Croatia to Riccione, Italy in 2006. In other words, his swim was fraudulent.

To those who respect his claims and laud his accomplishment, they note that his swim was observed by local swimming officials and reported locally and was accepted by the Guinness World Records.

But based on the high standards established by the Marathon Swimmers Federation in 2014, these observations, reports and acceptance by the Guinness World Records are insufficient for some swimmers.

The long-time standards of documentation for open water swims were established by the English Channel swimming community and other organizations from the British Long Distance Swimming Association and Irish Long Distance Swimming Association to the International Marathon Swimming Hall of Fame. But even these long-time standards of documentation were insufficient for some. The Marathon Swimmers Federation aimed to outlaw drafting from the escort boats, reiterate the no touching rule and independence of observers, and unify rules on equipment and swimwear.

The new contemporary standards of documentation for open water swims were established by Evan Morrison in April 2014. The April 8th 2014 Morrison Report (see here) accurately, objectively, and comprehensively presented a digital overview of Craig Lenning‘s 25.7-mile swim from the Farallon Islands to Muir Beach on the California mainland.

While Craig Lenning was the beneficiary of the Morrison Report, swimmers of previous generations did not provide the same level of documentation as is now expected in 2014.

Veljko Rogošić of Croatia fell into this situation. His crew did not release the same level and scope of detail in the public realm after his 2006 swim as was presented in the Morrison Report of 2014. Rogošić‘s lack of detail opened up the opportunity for criticism and disbelief among some contemporary marathon swimmers.

Sadly, Rogošić passed away in 2012 and is no longer here to defend himself.

But when these situations occur, the World Open Water Swimming Association believe the existing documentation and a swimmer’s track record of success are important factors to consider.

Given the fact that a 225 km swim or a swim of over 50 hours is beyond the capabilities of most humans, the capabilities and the track record of an athlete are essential to consider. That is, a swim of such length can realistically be accomplished by only those with years, if not decades, of experience and the requisite strength – both mental and physical – that comes with experience. Additionally, it is important to consider the innate swimming abilities of the athlete in question.

This is where Rogošić passes with flying colors. Even at the age of 65, Rogošić’s swimming stroke and efficiency in the water are evident (see video below). The 2-time Olympic pool swimmer and world professional marathon swimming champion proved his speed and stamina when he crossed the English Channel at the age of 63 in 11 hours 27 minutes in 2004. He even rarely used skin ointment as his stroke was so efficient and well-balanced.

An Honour Swimmer in the International Marathon Swimming Hall of Fame, Rogošić was clearly capable of a massively long swim after a lifetime dedicated to the sport of swimming.

He began as a great pool swimmer for the former Yugoslavia where he won 142 national championships and competed a total of 203 times for his country in international competitions. He set 51 national records in the 400m and 1500m freestyle, 200m and 400m individual medley, 200m butterfly and freestyle relays and was the national team captain for 15 years as he participated in two Olympic Games (1960 in Rome and 1964 in Tokyo). His highest international rankings were in the 1500m freestyle (fourth) and 400m individual medley (fifth).

Contemporary open water swimmers like Jamie Patrick have the opportunity to film and webcast their marathon swims from start to finish with modern-day broadcast and Internet technologies. Given this ability to film and broadcast an entire swim live, there is no question that the global open water swimming community can collectively vouch for the veracity of a swimmer’s claim. However, delivering a live broadcast of one’s marathon swims from shore to shore is not only costly, but also operationally challenging given the challenges of filming in open bodies of water. While such real-time delivery may become the Marathon Swimmers Federation standard in the future as broadcast and Internet technologies improve and become inexpensive, these capabilities were not available to Rogošić and his crew.

Essentially, they – and others in the past – relied on the tried-and-true method of crew members watching and documenting through written forms and video.

What video images remain of a swimmer like Rogošić can also be viewed with a skeptical eye:

While we do not understand the Croatian language in the video images below, it appears that Rogošić not only was capable of swimming for over 50 hours and 225 km, but also that he in fact did.

But issues remain for those interested in records and a global acceptance of their own swims: transparency and verification. How does one have their swim verified without a shadow of a doubt? There are several things that Jamie Patrick is doing in Lake Michigan that may be a precursor to future verification:

* He is using representatives of the Marathon Swimmers Federation as his official observers.
* He is webcasting his entire swim live to a global audience from start to finish.
* He is publicly posting the parameters (rules) of his swim.
* His observers are instructed to immediately disqualify him and pull him from the water if any parameters of his swim are violated.
* He is providing his information in English.

We celebrate both Rogošić and Patrick and stand in awe of their accomplishments.

Editor’s Note: The reported distance of Veljko Rogošić’s swim in the Adriatic Sea in 2006 is 139.8 statute miles (225 km). But the distance between his starting and finishing cities appears to be only a total straight-line distance of 121 statute miles (194.7 km), based on confirmation on Google Maps. However, information on the exact GPS coordinates of the starting and finishing positions are not known and were not reported.