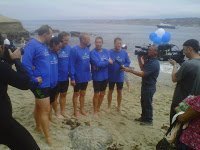 The official time was 101 hours 39 minutes and 53 seconds. GPS readings will be announced shortly. The team photo by Erica Cisneros is at the La Jolla Cove just after their finish.

A television news report can be seen here with some great video clips and quotes from the team.

The team’s Mother Ship, the 135-foot Pacific Monarch, obviously could not move at the speed of the swimmers, so it would move slightly ahead and then cut its engines as the swimmers caught up and passed it. Over and over again, the swimmers would be shuttled to and from the Pacific Monarch via a Zodiac.

The commitment to each other and the logistical and operational teamwork involved was impressive indeed.