Victory In The English Channel And In Life 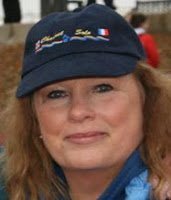 Vijaya Claxton from New York, one of the most respected, committed and cherished English Channel swimmers in recent history, passed away this week after losing her battle with cancer.

In addition to her position as the Coordinator, Panel of Counsel at the United Nations headquarters in New York City where she worked relentlessly as a public defender, she was similarly persistent in her pursuit of swimming the English Channel over the course of the years. 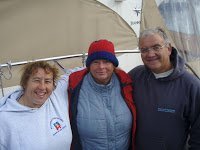 In 2007, after three difficult attempts, she achieved her dream at the age of 59 after battling tough conditions for 22 hours and 27 minutes. Her effort resulted in winning the Gertrude Ederle Award for the most meritorious Channel Swimming & Piloting Federation English Channel swim by a woman in 2007 and the Cape Storm Award 2007 for the longest solo swim of 2007.

As the news of her passing was learned throughout the swimming community, tributes to have been pouring in from all over the world from people who she touched and inspired by her actions, words and memory:

“She was a remarkable individual who gave so much to others. It was been a real privilege to be her friend. She has enriched my life and that of many people who had the fortune of knowing her. She leaves a big gap in many of her friends’ lives, but also the love and affection she transmitted to all of those around her. She will be dearly missed.”

“With her wonderful determination Vijaya finally became an English Channel Swimmer. It was a long-time dream realized. The crossing fulfilled years of training and spiritual work on her part and her loyal support teams of women. The CS&PF honored Vijaya with The Gertrude Ederle Award for her relentless effort to reach France and I know that meant the world to her. Vijaya embodied Victory which is the meaning of her name. She inspired many of us so much – beyond words for me here really.”

“I only met her once, but was in awe when she told me about her swims. We had a great laugh, but not once did she ever mention her illness or complain. I am in even greater awe of her achievement and of her. She is definitely an inspiration to us all and will be sadly missed.”

“Vijaya was a bubbly person known to a lot of us in the Channel swimming world. She came into our lives determined to swim the Channel and did it on her fourth attempt with Eddie in 2008. Her first three attempts were with me. All were long swims, all were great advances on the previous swim. All were very happy swims with a great support team of girls who enjoyed life to the full. Vijaya, complete with her smile and her willingness to help all around her will be sadly missed by the people who knew her. Those who did not know her missed out on one of the little pleasures of life.”

“She was truly an inspiration. Vijaya taught me so much and I am a better person for having known her.”

“I remember Vijaya swimming in the Dover harbor, always having a smile on her face, no matter how long she was in the water. The love she had for the water and our sport will be missed.”

A memorial service will be held on January 22nd, 2010 at 1 pm in the Chapel of the Church Center for the United Nations, 777 United Nations Plaza (1st Avenue at 44th Street) to celebrate the life of Vijaya (Catherine) Claxton.

She truly led a life worth living. May many others follow in her wake.