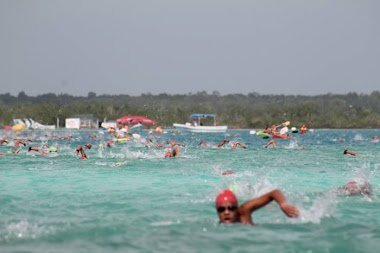 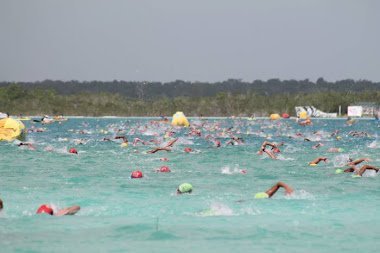 In the middle of the Laguna de Bacalar (lagoon), the water is as blue as can be. Magically blue. Majestically blue. Marvelously blue.

And, as usual, the VIII Maratón de Aguas Abiertas de Bacalar in Mexico went off spectacularly in these baby blue conditions.

In Quintana Roo, over 1,200 swimmers competed in the 1.25 km, 2.5 km and 5 km races in the Laguna de Bacalar. It was the largest edition of one of the bluest races on the planet.

In the women’s race, first place sent to Mariana del Río Carpinteiro in a time of 16:59, 17 seconds over Viridiana Sánchez Arévalo.

The Laguna de Bacalar is a lagoon that is popularly known as the Laguna de los Siete Colores (Lagoon of Seven Colors) because there are 7 different shades of blue in the water.