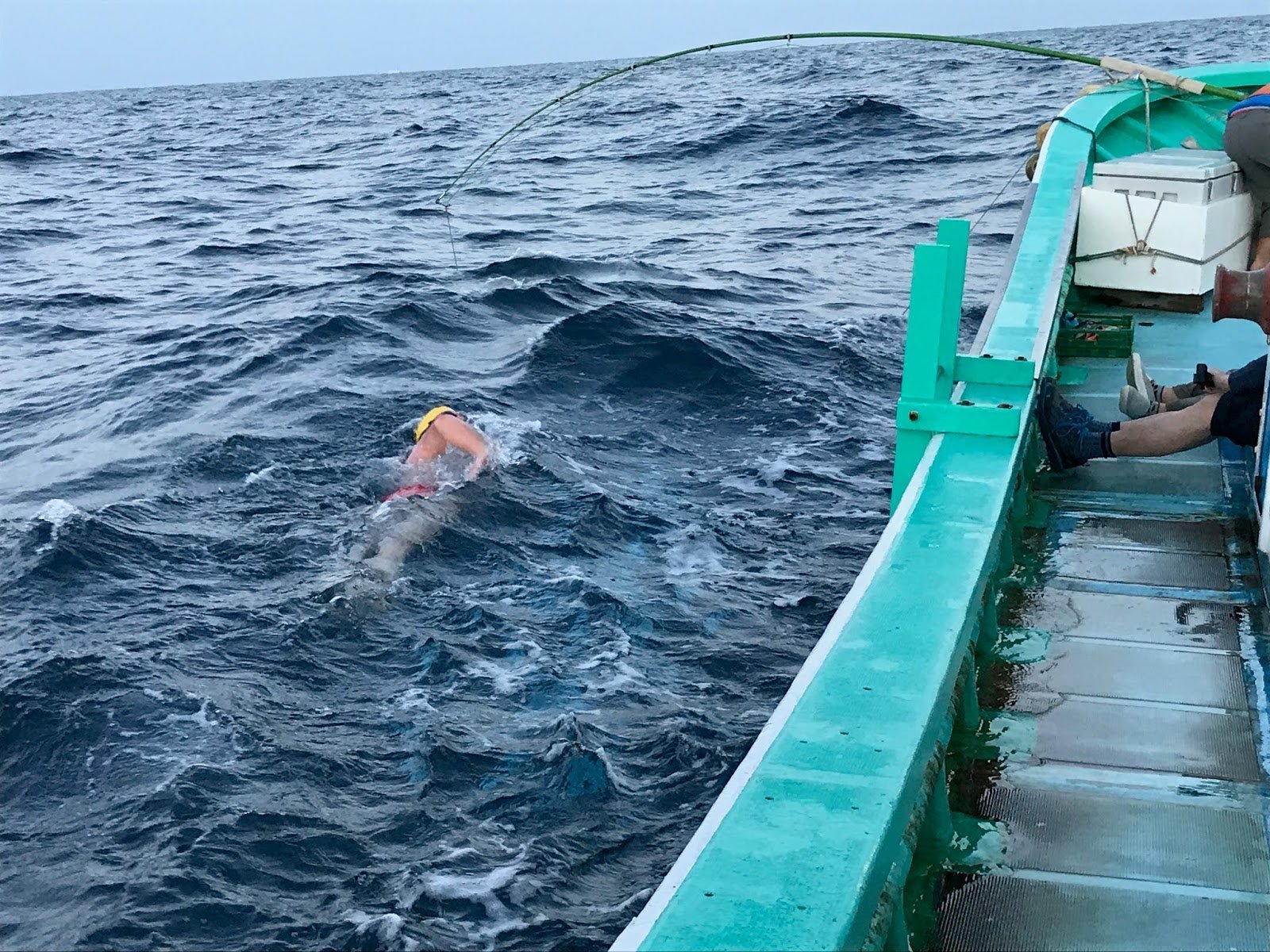 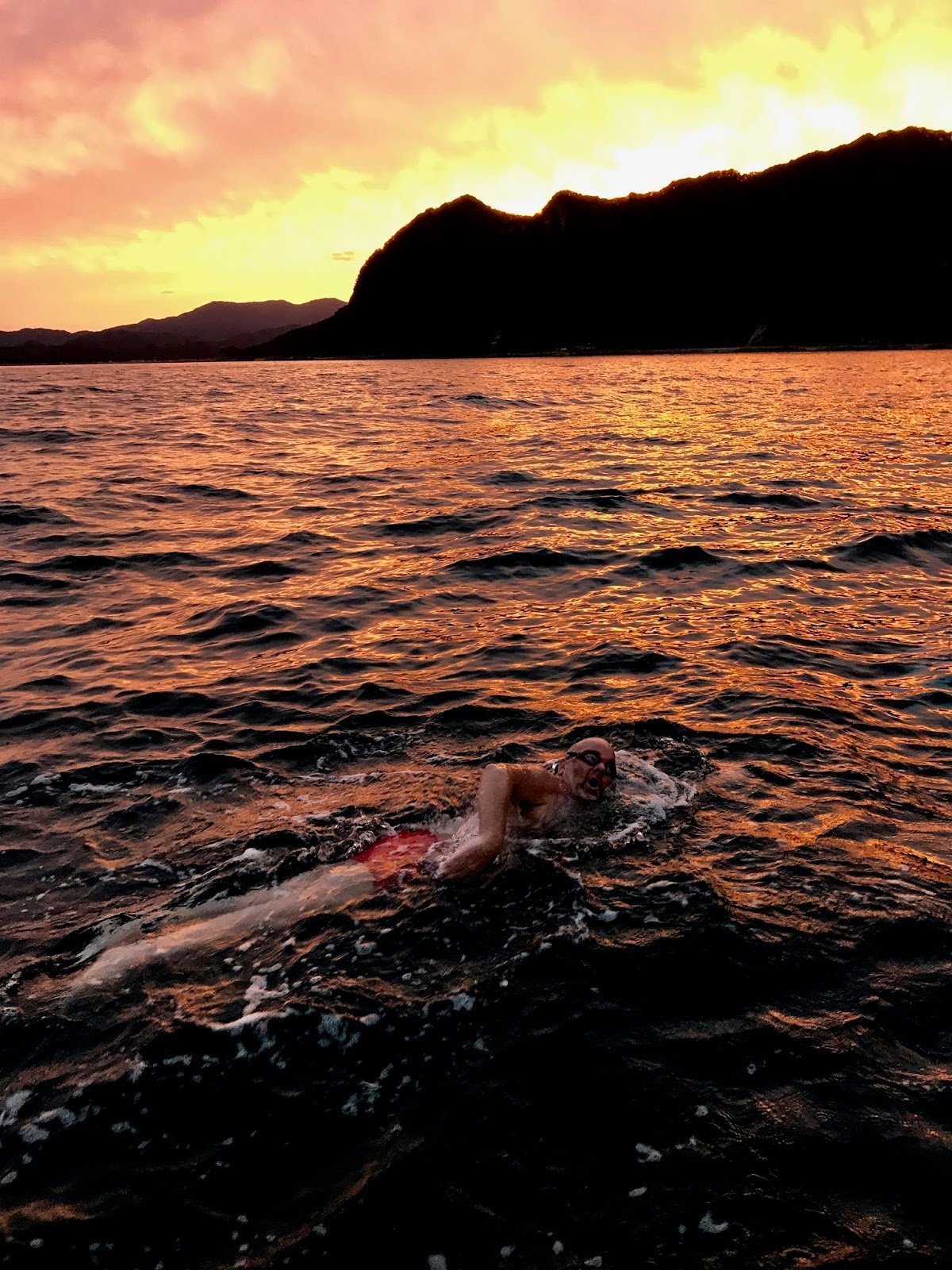 The pace of modern life and the state of perennially over-stimulated apathy in which we all live, leaves scant time for introspection.

Yet here we are, sat in New Zealand having completed my Cook Strait swim in 10 hours 45 minutes.

Now I am contemplating the improbable journey that has brought us here.

They say one question can change your life … and I am no different.

The question, when it arrived at Christmas dinner in 2009, seemed so innocuous, my older brother Ian saying “Would you like to take part in a 4,500 meter charity sea swim between two islands next August?”

But at the time the question was asked, my obsessive-compulsive disorder was focussed solely on work, exercise was non-existent and my blood pressure readings resembled a particularly close cricket test match score.

I chose to swim.

And a little over 10 years later that decision has changed my life beyond recognition. Whilst getting a few widths under my belt we, as a team, have shared so many mad adventures and met so many amazing people that I shudder to think what we would have missed out on if I had decided not to swim.

But looking back, it is not the swims themselves that dominate my recollections, but rather the amazing people that have helped me along the journey.

My swim path started with me being adopted by my local swim family. Carl Dawson kindly took me out for my first sea swim in Guernsey in January 2010 which started with him wondering if I could handle the cold and ended with him repeatedly muttering “You’re not human man!” as I helped him dress afterwards.

The early steps on my swim path faltered when I severed the Achilles tendon in my right leg before the charity swim of August 2010. I nearly dropped swimming entirely given that I would be in a huge surgical boot until long after the charity swim date. But my Dad suggested that I do the charity swim anyway, with both my legs tied together. That approach worked and as I limped heavily up the beach at the end of that swim a glimmer of self-belief in my ability to swim emerged. I can only apologise (again) to Wendy Andrews for booting her in the head with my cast that day!

Like every marathon swimming novice, I had a big crew for my English Channel swim in 2012 comprising my Dad, my brother Ian, my friends Giles Newark and Tellervo Maukonen and ITV documentary maker Michael Ogden who was filming for the TV series “Island Hospital”. I remember meeting pilot Neil Streeter for the first time a few hours into the swim when he appeared to smile at me and shout “Oi! Fatty! Get a F-ing move on! I didn’t bring the F-ing Christmas lights!” That kind of motivation works with me (although happily it didn’t make it into the documentary) and was complemented by the booming (and distinctly less profane) encouragement from observer Mike Ball.

Having probably over-crewed on my English Channel swim, I over-compensated on my Catalina Channel swim of 2013 by only taking my wife Andrea as crew. However, the Catalina Channel Swimming Federation protected me from my own inexperience by providing an observer (Don van Cleve), an assistant observer (Robert Phillipson), an additional crewperson (Bob Cohen) and a pair of kayakers (Jen and Barbara Schumacher). Captain Dave (the pilot) left me with a fond memory by walking me to the edge of the boat at the start of the swim and saying “Don’t worry, we don’t have any man-eaters around here … only boy-eaters!” before shoving me over the side. I feel compelled to also mention Mikey in the galley that day, as Andrea is still talking about your breakfast burritos seven years later.

My Strait of Gibraltar swim of 2014 went to the new extreme of having no crew at all, because I was doing the swim with a team organised and supported by Neda el Món (a swim team from Barcelona run by Marc Caballe). Whilst training with the team in Barcelona the head coach (Jonny Gomez) nicknamed me “La Machina” (or “The Washing Machine”) because my technique was so bad. Despite my terrible stroke, it was a pleasure to complete that swim alongside Ingrid Basso, Loic Tordo and Henry Sanz. Playing tig with massive cargo ships and being frightened to death by a pod of dolphins that suddenly appeared underneath me were the highlights of that short, but iconic, swim.

Following on from Jonny’s comments about my technique, and in light of how tough the 2015 North Channel swim was likely to be, I engaged the services of Conor Osborough at SPEAR late in 2014 to begin the rebuilding of my stroke … a process which has continued every since (because I am a slow learner), although we are definitely making progress.

The North Channel swim marked a transitioning of the guard in terms of crew because I was supported by my brother Ian, my friends Mandy Mackelworth and Shane Torrens and friend and film-maker James Harrison who was filming for the documentary Sea Donkey (see seadonkeyfilm.com). My North Channel swim was the toughest day of my life and, without offering any spoilers for the documentary, we (collectively) went as close to the line between success and disaster as I ever want to go again. It was sufficiently traumatic for my brother Ian that he retired from crewing on marathon swims permanently that day. The North Channel swim wasn’t all bleak though as the documentary recorded some wonderful one-liners from pilot Quinton Nelson and the immortal line from observer Gary Knox, “Adrian … can you breathe? Then F-ing Swim!“

The crew for the rest of my Oceans Seven swims began to coalesce in 2016 when I took on the Ka’iwi Channel swim between Molokai and Oahu in Hawaii as I was supported by Mandy Mackelworth and Pete Rowland. We also had local assistance from observer Jeff Kozlovich, assistant observer Daniel Hildebrandt, pilot Mike Twigg-Smith, and assistant pilot Mike Scott. This swim marked the only occasion in any of the Oceans Seven swims on which I said to my crew that I intended to abandon, after being accidentally electrocuted in the teeth within the first couple of hours by the electronic shark deterrent system we were using. Pete and Mandy played the ultimate game of good cop / bad cop that day and managed to cajole me the 17.5 hours to the finish line.

My 2017 Tsugaru Strait swim in Japan was a deeply uncertain affair, because after a great season’s training I was struck down by a mystery gut infection that eventually resulted in a month off my feet, a ten kilogram loss in body weight, exploratory stomach surgery (via keyhole) and a hallucinatory week in hospital on Fentanyl. We had nine weeks between my stomach being stitched up and the start of the swim. My crew for the Tsugaru swim were Mandy Mackelworth and Pete Rowland and my friend Simon Davies. We also had local assistance from observer Masayuki Moriya (Observer) and Captain Mizushima. I was failing the swim from the start and I continued to fail for about 11 hours, until we were literally running out of land in Hokkaido on which to finish. However, my crew stuck by me, steadfastly insisting that if I was still swimming well, there was hope. I’d always heard that marathon swims require participants to go outside of their comfort zones. It had never occurred to me before that one of those participants could be the skipper himself. My crew defended my right to swim long enough that we finally got around the tidal zone and I was able to swim to shore. I will never forget Mandy saying “You’ve got this … all you need to do from here is grind it out.”

Preparation for the Cook Strait this year has been odd, because we’ve had to prepare for a marathon swim during the winter months. This has resulted in the need for assistance from different crews of people. My sea-swimming crew (Regina Luxon and Mike Ward), where necessary, donned wetsuits and flippers and swam in shifts in order to support swim for me. Probably the toughest training swim in the sea was a 125x100m off 1:45 in a 50m sea-filled pool in January at about 11°C. My pool swimming crew (Becky Simmonds, Iain Lowe and Izzie Grierson) worked just as hard helping me do multiple editions of 200x100m off 1:45.

The first four hours of the Cook Strait swim were amazing, swimming strongly into a slack tide. I had worked hard to swim more or less consistently at 4 kilometers per hour and at the end of the first four hours I was about halfway to the South Island.

I should have known it was too good to last. In the second four hours, the tide started pushing north and my progress slowed. It was during this period that I started to suffer some significant gastric distress (i.e. symptoms very similar to a vomiting and diarrhea bug). This really interfered with my ability feed regularly as I couldn’t keep my feeds down for a while and missed a couple of feeds while my stomach sorted itself out.

As we entered the last three hours of the swim it was touch and go as to whether I’d make it swimming at the same pace. It was the usual channel swimming problem in that the tide had turned and was now rushing down the coast of the South Island and if I didn’t cut the current fast enough I’d be pushed back out to sea. My crew spotted the potential problem and went to work. Our course was changed to head into the current and the rising swell at a sharper angle, actually making the swimming harder, in order to make ground and I was asked to increase the pace to what it had been in the first four hours.

At that point I was reeling a little. I was watching my Oceans Seven slide away from me, stroke by stroke. I was thinking about my dearly departed Dad and what humorous words of encouragement he would have offered and I was thinking of the local Poolpod Appeal which might falter if I failed the swim. Then, with roars of encouragement from Pete Rowland and Corey Fairbairn who both spent the entire day soaking wet in the IRB right next to me, the usual swim discipline reasserted itself. I focused on the countless hours I’ve spent ploughing up and down the Ladies Pool with Reggie Luxon and Mike Ward. I concentrated on the miles and miles I had swum indoors with Becky Simmonds, Iain Lowe and Izzie Grierson. And I remembered the key words for improving my swim technique from Conor Osborough.

From somewhere I summoned the willpower and determination to finish. I upped my swim speed, not to where it had been at the start, but close enough … and then I just hung on … relying on the innate stubbornness of the Guernsey Donkey to see me through. The end of the swim was a blur of pain and effort, but I remember pulling up sharply when I realised that Mandy Mackelworth was swimming by my side and that I had made it. We cruised the last hundred metres and touched the very end of the South Island cliffs at the same time, finishing the swim in 10 hours 45 minutes.

Adrian Sarchet is fundraising for the installation of a revolutionary poolside lift at his local swimming pool. To donate, visit here.