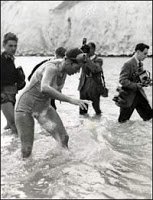 After receiving her Lifetime Achievement Award for her exploits in the open water, we researched Greta Andersen‘s exploits and agree that she is undoubtedly one of the greatest marathon swimmers in history.

The wonderful vintage videos of her various professional marathon swims that are posted on her website are also shown below. The vintage videos include her victorious 1958 Billy Butlin’s English Channel International Race which she won in 11 hours.

We are struck how her stroke-per-minute pace only diminished ever so slightly from the start to the finish and how strong her kick was throughout the swim. It was also remarkable that the race had logistical support with helicopters and the fanfare at the finish on British soil. Enjoy:

Another wonderfully entertaining and historical video captured her victory in the 1958 professional 42K (26-mile) marathon swim in Guaymas, Mexico.

What is remarkable about this swim was its rather complicated course, Greta’s thick cap at the beginning (removed at some point) and her unrelentless stroke-per-minute pace, especially at the end. From the underwater view in the beautifully clear Mexican waters, one can appreciate Greta’s symmetrical stroke. She breathed to the right as she closed in on the lead men – until in the English Channel when she breathed primarily to the left. Like the English Channel races, the Mexican populace came out in groves to see Greta win and she easily overtook the top professional men of her era.

Greta’s unprecedented double-crossing of the Catalina Channel was also captured by video.

She set out from Catalina Island at 12:41 am and headed to the California mainland. It was obvious that swimming at night was not a problem for her, but the length of her swim – 26 hours and 53 minutes – took a toll on her customary strong stroke-per-minute pace.

Two escort boats and paddleboarders guided her throughout the swim as was traditional in the Catalina Channel. She finished her first leg in 10 hours and 49 minutes, but received numerous cuts and bruises as she climbed up the sharp rocks. 30 minutes later, she headed back to Catalina Island to complete her double-crossing, swimming throughout the day and once again back into the night. Her determination and sheer exhaustion upon her completion are quite dramatic.

One problem that was not captured on video was when a 10-foot shark was spotted underneath Greta and the lights that were used to film Greta were turned off, according to Penny Dean’s authoritative account of the history of swimming the Catalina Channel

Her comment after finishing, “If I had known what I was getting into, I wouldn’t have done it,” summarized the difficulty of the swim.