Vitality And Vigor With Vito

Six swimmers – 3 from Mexico and 3 from the US – will be together for a very long time on the high seas: between 30 – 40 hours in the Sea of Cortez.

Teamwork, patience and camaraderie will be the highest priorities as sleep deprivation, mental stress and physical fatigue start to set in as the swimmers set off in their non-stop attempt to cross the Sea of Cortez. 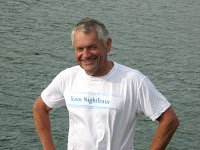 “I try to swim 30 minutes a day, mostly in the San Francisco Bay year-round without a wetsuit,” explained Vito about his training regimen for the endurance relay. “I like open water and it gives me mental toughness to get my butt into freezing water. We also do night swims once a week. There is nothing like running into a seal at night to calm down.”

In a relay where Vito will be getting in and out of the water over the course of two days, he developed a specific training regimen, “I build up to a two-mile lake swim where I swim two or three times a day.”

“Swimming even 30 minutes multiple times a day is better then doing three four-hour swims. I can get the miles in but recover quickly. I do weights and am a bit fanatic about core work every day. 300 sit-ups religiously, arm work and upper body weights galore.”

“On the weekends, we get in our two-hour swims in the Bay and mix it up. We go in the most drastic stormy conditions with huge waves to get used to real waves and swim in the real world. I threw in a Strait of Gibraltar swim to see where I was and swam 5:41 without much effort.”

He better be. From his home base of San Francisco, he will complete the 182K Sea of Cortez Swim and then will head back north to attempt to become the first relay team to swim 30 miles from the Farallones to Aquatic Park in San Francisco. Vito will have to deal with recovery from the 182K relay as well as significant water temperature differences between the warm Sea of Cortez and the cold of San Francisco.

We will keep close track of Vito and his two teams on their record attempts in both the the Sea of Cortez and the Farallones via SPOT. Fans can follow the team by receiving an update every ten minutes, so anyone, anywhere, anytime.

Vito is the author of a book entitled Happiness is a Sharp Chainsaw, an autobiography about his amazing life in America, a country he arrived as an immigrant.

He survived the Vietnam War and later founded a successful executive headhunting firm while enjoying and meeting every challenge thrown his way and many other challenges that he took upon himself, from marathon runs to cold-water swims. All proceeds are donated to the Semper Fi Fund.