If France wins the International Olympic Committee bid for the 2024 Summer Olympic Games as is widely reported and assumed, then France will have a lot to cheer for in the Seine.

The four members of each team, including 2 men and 2 women, swam 1.25 km before touching their teammate and swimming off.

Brendan Casey put his American team in first with his lead-off leg among the 19 international teams with a 14:00.3 split with Japan’s Yohsuke Miyamoto behind followed by Brazil’s Allan do Carmo.

5 km gold medalist Ashley Twichell exchange a legal touch above the water and took off, but Great Britain’s Tobias Robinson took over the lead with Japan still in second on the strength of Yasunari Hirai with South Africa in third due to a strong leg by Chad Ho.

Great Britain’s 5 km bronze medalist Timothy Shuttleworth opened up a nearly 50-meter lead, but the major change was the tremendous third oleg by 10 km gold medalist Aurélie Muller who put France in a strong second position – but still nearly 40 seconds behind Great Britain and almost 13 seconds ahead of third-place Italy that was pulled into third by Federico Vanelli who said later, “Rachele Bruni + Giulia Gabbrielleschi did a great job, so I was in a relative good position as the third swimmer. We have a strong team.”

Oceane Cassignol of France admitted, “I felt some pressure before the race, since being the first swimmer in the team event is not easy. That’s why I was a little bit nervous, but in the end we managed to win the gold medal.”

Olivier acknowledged the degree of patriotism. “I won the gold medal here in the 5 km, and the bronze medal in the 10 km, but I was still very motivated, since winning for my country with the team is a great feeling. Open water swimming is kind of an individual sport so actually it is fun to work with your teammates. Every time when we [put on our swim] caps, our goal is to win outside. I think we all swam really well and we swam the races the way we wanted.”

Their American rivals were also pleased with the results. Brendan Casey said, “My goal is always to win the race, but I am still happy with this silver medal.” Haley Anderson remarked, “After the 5 km that was not a successful race for me, I was very happy to win a medal in the team event. I like this new formula, since there are more tactics, and it is more exciting. We were struggling a little bit at the relays but it was pretty much new for all. It gives more fun when we race for each other. Our tactics worked well.” 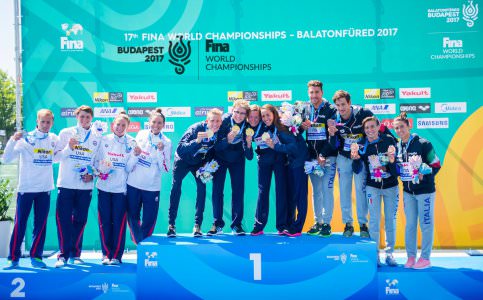 Stephanie Horner of Canada summed up the thoughts of many, “The team enjoyed the relay atmosphere in an open water race. “Relays are so fun, it’s all about spirit. It’s nice because you get to share the pain and you can’t let your team down.”

Eric Hedlin agreed, “I love relays, I love open water, so this is the best combination of the two” as did Breanne Siwicki, “I thought it was good to be a part of a team with so much racing experience. It was great that we finished better than we expected to.”