Volcano Swims Around The World 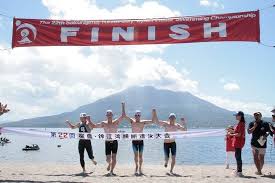 The Sakurajima Kinko-Bay Open Water Swimming Championships (shown on left) has seen up to 242 four-person teams start on Sakurajima volcano and finish in Kagoshima in southern Japan.

Many open water swimming competitions are held near volcanoes, active, dormant and extinct. Some of the more well-known volcano swims around the world include the events listed below.

To report other volcano swims around the world, send information to [email protected].