Vote For Valerio, Italy’s Sportsman Of The Year

2009 world 25K champion Valerio Cleri is up for nomination for the Sportsmen of the Year in Italy.

Valerio has always been in the top echelon of professional marathon swimmers, but he truly showed his heart of a champion at the 2009 World Swimming Championships. 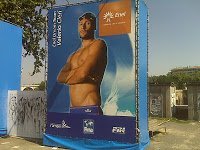 For his dramatic win, he was not only nominated for the World’s Great Open Water Swim of the Year award, but also for Italy’s Sportsmen of the Year.

Valerio is known to train extraordinarily hard, is totally committed to the sport and is a humble champion and fine representative of marathon swimming.

So far, Valerio is following behind Edward and Francesco Molinari from golf (32% of the total vote to date), Roberto Cammarelle from boxing (25%), but ahead of Valentino Rossi from motorcycling (19%) and Andrea Baldini from fencing (3%). Valerio currently has 20% of the total vote.

We encourage the global swimming community to show our support for Valerio and vote for him online here.