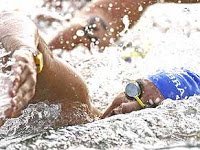 Members of the FINA Federations vote the world’s best aquatic athletes in 2010. In the open water swimming category, there are five nominees.