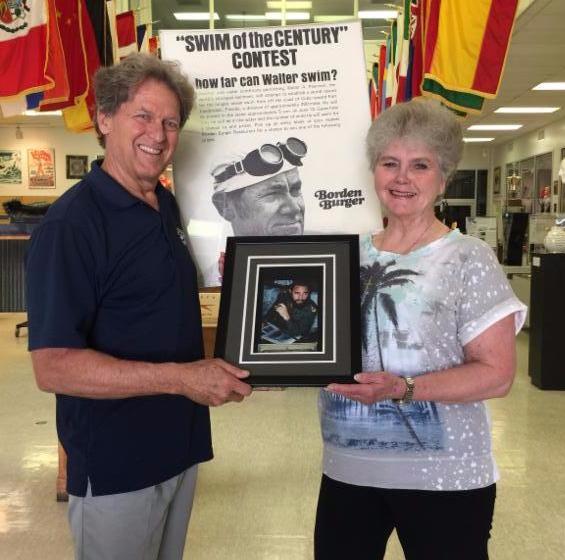 Faye Poenisch presented Bruce Wigo of the International Swimming Hall of Fame with the poster and a cigar that Fidel Castro left behind after visiting her husband Walter Poenisch‘s escort boat that would guide him from Cuba to Florida.

At the age of 65, his 1978 swim was an example of Speedo diplomacy with the aim of world peace.

Over the course of his career, he completed open water swims in Michigan, Ohio, Florida, and in the Atlantic Ocean where he set three world records.

He was called the World’s Strongest Endurance Swimmer as he towed a 30-ton paddlewheel boat while swimming with his hands and feet shackled. But his most publicized swim was a swim from Cuba to The Little Duck Key in Florida at the age of 65 in 1978. 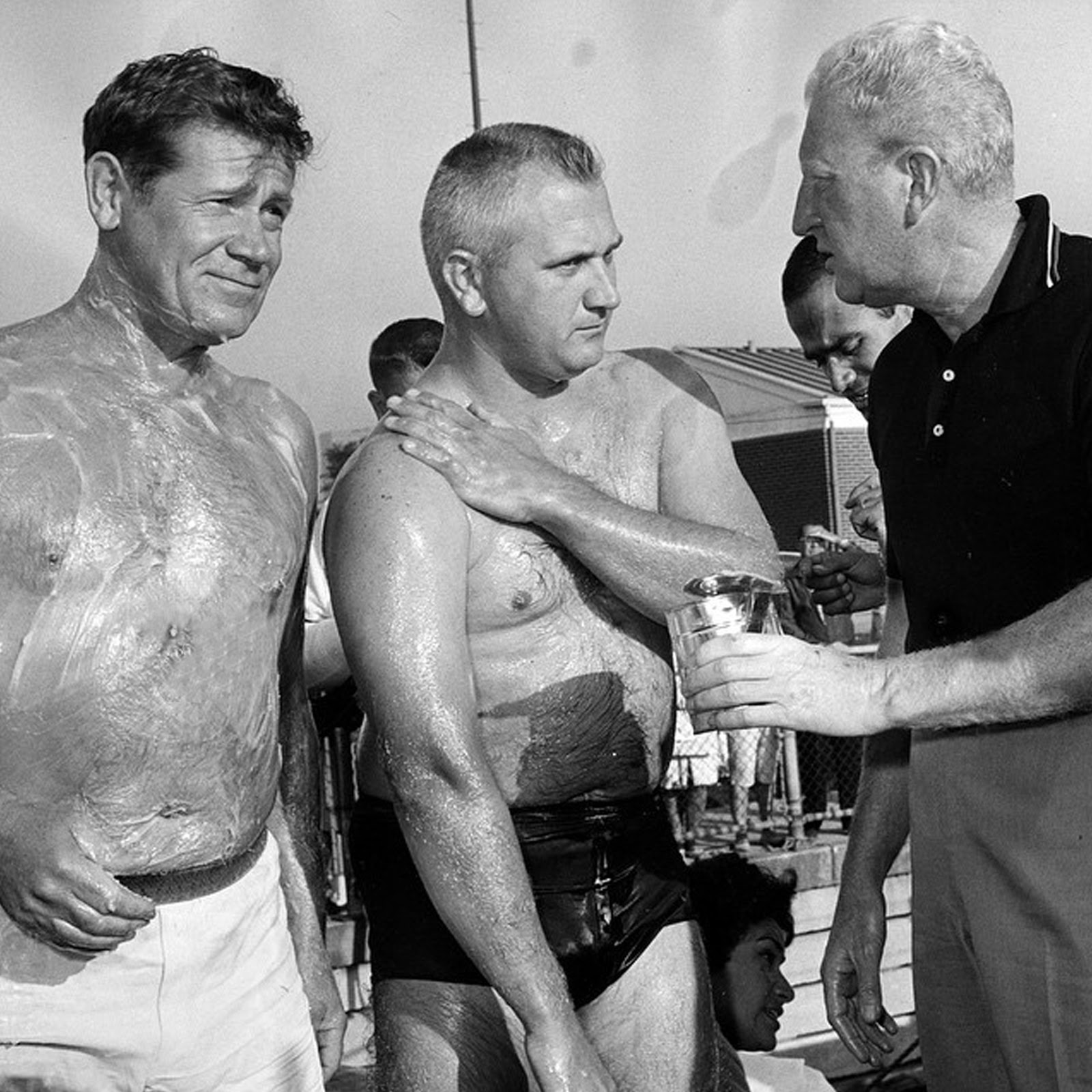 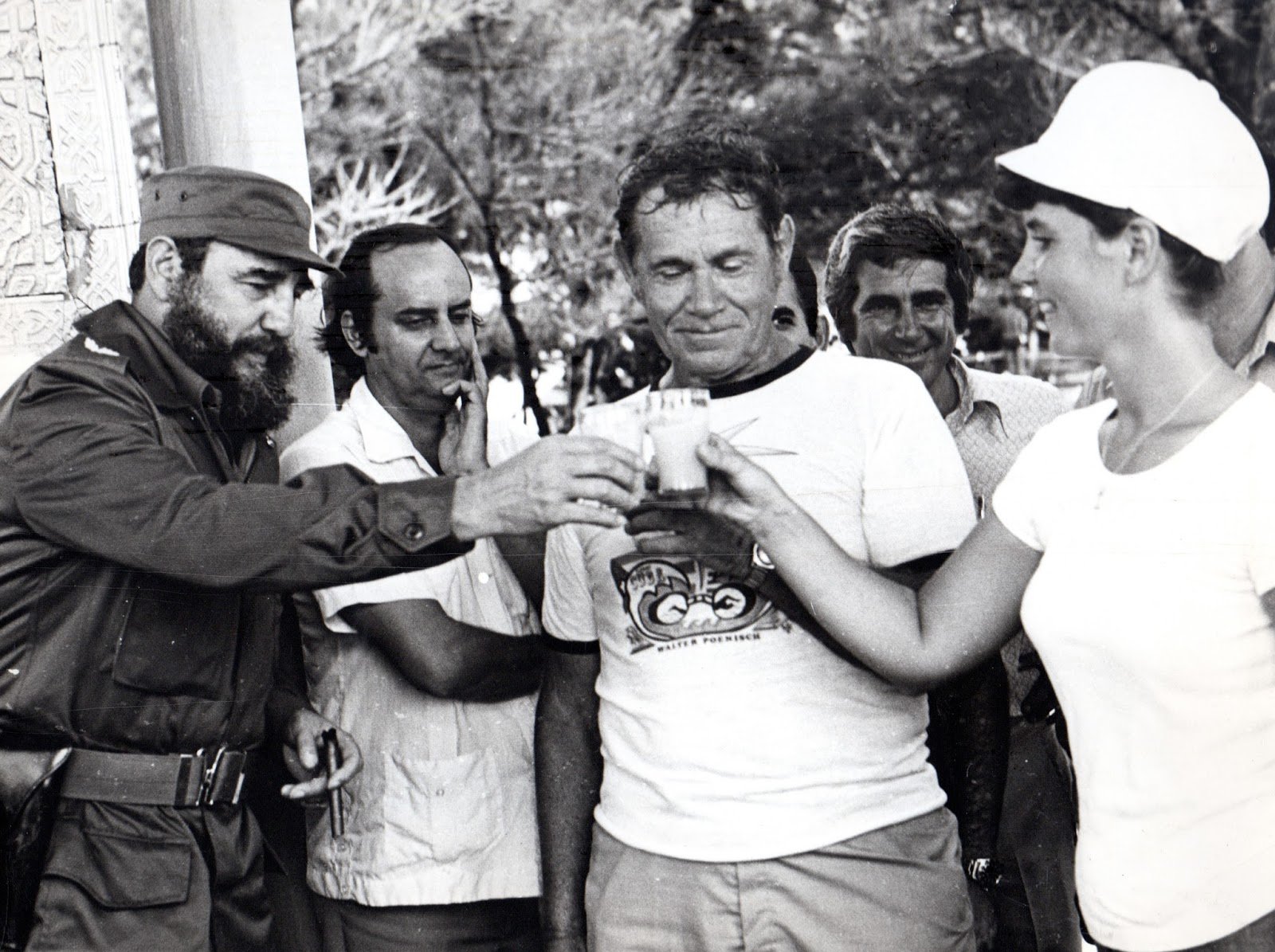 Poenisch of Grove City, Ohio was one of 17 honorees to be inducted in the International Swimming Hall of Fame.

“Lost in time and in the avalanche of publicity surrounding attempts by others to swim from Cuba to the USA over the past 40 years is the remarkable story of Walter Poenisch and his ‘Swim for Peace.’” says ISHOF President & CEO Bruce Wigo.

“Walter was honored by the ISHOF as a Pioneer. I want to commend the selection committee and its Chairman, Camillo Cametti of Verona, Italy, for recognizing Walter who was one of the first to use his swimming talents to promote a greater cause.

The Pioneer category was created to honor great achievements that have been overlooked by the fog of time or special circumstances that interfered with their careers, such as accidents, war or politics.
“

Throughout his career, his swims were often reported in the media. An article from June 1972, with the headline ‘Sharks Delay Ocean Swim‘, gives a hint of his exploits: “A seven-foot, brown-finned hammerhead shark swept between two escort boats straight for the chicken wire cage enclosing 58-year-old Walter Poenisch, a one-time cookie baker turned ocean swimmer from Grove City, Ohio. Shouts of “Shark! Shark!” filled the air over the placid Atlantic Ocean waters 20 miles off Miami, and Poenisch scrambled out of his cage and aboard a towboat, where he claimed a world record for long distance ocean swimming.

‘Ninety miles is the record now,’ he gasped. Whether there ever has been a record for ocean swims isn’t certain, although the tanned and husky Poenisch said the old record was about 60 miles, after he had ended his journey up the Florida Straits Wednesday. Poenisch had planned to swim 200 miles, from just off Cuba’s shores to Fort Lauderdale.“