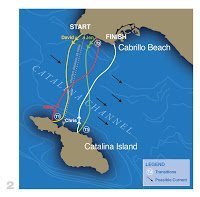 Swim22 is a four-way Contiguous Solo Crossing Relay across the Catalina Channel with Chris Dahowski, Mike Vovk, David Hartmire and Jen Schumacher as the four swimmers, each swimming a solo Catalina Channel crossing.

But after observing their training and level of commitment, we believe the probability of success is much higher. Our guess is that they have an 80% probability of success. The odds are high of the team mentality factor. It is a fact that athletes perform faster and better when they are members of a team. This happens at the Olympics and it happens in high school sports – and we believe it will happen with Swim22. Each of swimmers will perform better than they would as a true solo swimmer because they are not only swimming for themselves, but also their teammates and beneficiaries of their charity swim.

There are very practical reasons why insiders say open water swimming is 80% mental. Because it is. Success will come from their minds and hearts…of that, we are sure.